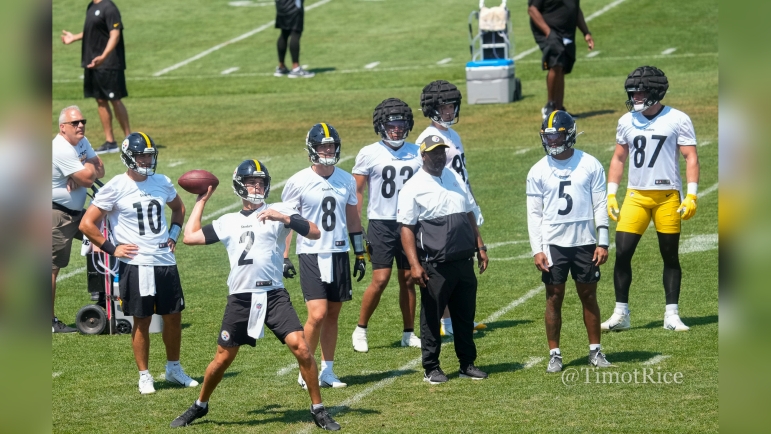 As the Pittsburgh Steelers are preparing to face the Carolina Panthers, it is more than likely that they will be without starting quarterback Kenny Pickett. If Pickett is indeed a no-go, the team will likely start Mitch Trubisky at quarterback, who had started the first four games. Interim Panthers head coach Steve Wilks, who has had the job since former head coach Matt Rhule was fired in Week 5, was asked about what differences he anticipates in the Steelers’ offense amidst the quarterback change.

“It is more of the scheme,” Wilks said when asked about what the difference between Pickett and Trubisky is according to Panthers.com. “They’re gonna pretty much, in my opinion, do the same thing that they do. Try to establish the run game, move the pocket a little bit, and then take the shots vertical over the top.”

The Steelers’ offense has faced no shortage of criticism this season. Perhaps the biggest criticism is repetitiveness in play calling, as offensive coordinator, Matt Canada has a history of calling simplistic offenses. Wilks’ statement does have some merit. Establishing the run game and moving the pocket is part of the team’s offensive philosophy regardless of who is under center. That being said, it’s important to look at the numbers when the two quarterbacks play to examine Wilks’ statement.

Pickett has started nine games and played 344 snaps, while Trubisky has started four games and played 172 snaps. According to PFF’s premium stats, Trubisky’s average depth of target is significantly higher than Pickett’s, with the former having a 10.3 ADOT and the latter 7.9. A staggering 19% of Trubisky’s passes are over 20 yards from the line of scrimmage, which ranks first in the league. That number for Pickett is 11.9%.

According to the numbers, Wilks’ statement on vertical shots is not accurate, as the team attempts them more often with Trubisky than Pickett. Now, this could be a case of Trubisky being more aggressive, and Pickett being a rookie. However, it’s reasonable to assume that Canada tailors his play calling and game plan to best fit the two quarterbacks’ skill sets.

For more context, in the three games where Trubisky started, the team ran the ball 22 times per game. In the seven games that Pickett started and finished, they ran the ball 29.1 times per game. Granted, this can be attributed to the team’s run game evolving throughout the season. However, the fact remains that they are more likely to pass it with Trubisky than Pickett by a considerable margin.

All in all, the Steelers’ offense will likely look different with a veteran like Trubisky than a rookie in Pickett. Given their low playoff odds, it is probably for the best to tailor the offense in a way to help Pickett’s development. While there is some merit to Wilks’ comment, the numbers suggest otherwise.