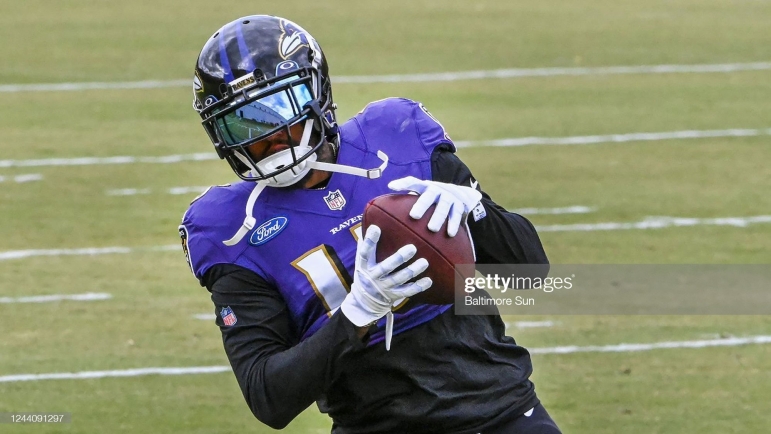 Wide receiver Desean Jackson has had two constants throughout his football career. Ridiculous speed and a crazy number of teams. Still one of the fastest receivers in football, the 36-year old Jackson is on his sixth football team and seventh if you include two stints with Philadelphia. Jackson’s latest spot is Baltimore, signed to their practice squad in mid-October before recently being promoted to the team’s 53-man roster.

During the offseason, he was in talks to play for a different AFC North team. The Pittsburgh Steelers. Speaking to reporters ahead of Sunday’s matchup between Baltimore and Pittsburgh, Jackson said he talked with Mike Tomlin about coming to the Steelers this offseason.

"Mike Tomlin, we had a few talks and he’s like, ‘Yeah, I’m going to bring you in’ and it never happened. Now ya’ll missed out and are on the other side. So now I have some extra motivation.”https://t.co/xCGp5HfErr

As shared by Ryan Mink via the Ravens’ website, Jackson says Tomlin planned to sign him in the offseason. Clearly, that never happened and Jackson had to wait until the middle of the season to find a new home.

“Mike Tomlin, we had a few talks,” Jackson said. “He’s like, ‘yeah, I’m gonna bring you in.’ Never happened. So now it’s like, alright now y’all missed out now. So now I got some extra motivation.”

Perhaps one reason why Jackson considered coming to Pittsburgh was for family reasons.

“My family is from Pittsburgh, Pennsylvania…my first game actually when I was in Philly, we played the Pittsburgh Steelers for the preseason game. My dad had the Eagle Jackson Jersey on but he had his Terrible Towel.”

It’s unclear what type of role Jackson would’ve had in Pittsburgh. They needed return help but Jackson hasn’t done much of that since early in his career. Perhaps he would’ve been a situational speedster but the team’s drafting of George Pickens and Calvin Austin III and waiver claim of Miles Boykin lessened the need to add to the receiver room.

Maybe Tomlin used the “I’ll get you when you’re old and cheap” line on Jackson the way he did punter Pat McAfee. Regardless, Jackson’s mission is now to help beat the Steelers this weekend. In three games this season with Baltimore, Jackson has five catches on eight targets. True to form, he’s been a big-play guy, averaging 20 yards per catch with a long of 62. The Ravens are hurting for receiver help after losing Rashod Bateman for the season and Jackson remains a game-breaker that can stretch a defense vertically and at the least, help open things up underneath.