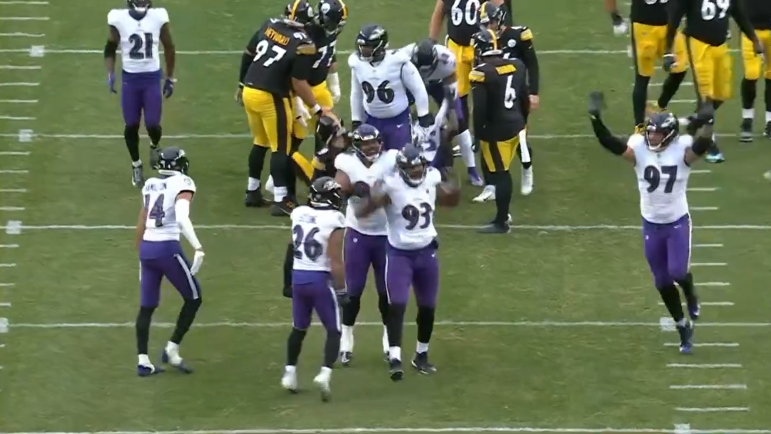 When Baltimore Ravens defensive lineman Calais Campbell blocked Pittsburgh Steelers kicker Chris Boswell’s 40-yard field goal try with 11:19 left in the fourth quarter, it shifted the momentum of the game and led to a Ravens field goal that would ultimately be the difference in Baltimore’s 16-14 win. Campbell said that before the play, Baltimore special teams coordinator Chris Horton called an audible and had Campbell use a swim move in the A-gap on long snapper Christian Kuntz, and the move worked as he was able to block the field goal.

“Coach pretty much called an audible. Chris Horton came to me on the sideline and it was like, ‘hey, I’m gonna switch it up.'”  Campbell said in his press conference via the Ravens’ Twitter account.

.@CalaisCampbell tells the story of what led to his blocked field goal. pic.twitter.com/g1SmWs0LAN

Campbell said the move was something the Ravens did last year, but haven’t done yet this season.

“We did it last year, but I haven’t worked on it since last year. But it was a good call, he kicked the ball, I had a good chance to get up there and get it, I got my left hand on it. It was a good feeling.

If Boswell had made the field goal, the Steelers would’ve trailed 13-10 and Baltimore probably would’ve started their next drive with slightly worse field position. Instead, the Ravens maintained their 13-7 lead, started their drive on their own 30 and used the run game to take over seven minutes off the clock while driving down the field to set up a 30-yard field goal by Justin Tucker to give the Ravens a nine-point lead at 16-7. The blocked kick was a huge play in the game, and it was just an embodiment of how the Week 14 matchup went for Pittsburgh.

Starting quarterback Kenny Pickett exited the game after the team’s second drive, and backup Mitch Trubisky threw three interceptions, including two deep in Baltimore territory. The Steelers’ defense had no answer for the Ravens’ rushing attack and specifically J.K. Dobbins, who returned from injury to rush for 120 yards and a touchdown on just 15 carries on a Steelers run defense that had been solid up until this point in 2022. On Friday, T.J. Watt acknowledged that defending the Ravens’ rushing attack would be a challenge, and Pittsburgh was certainly challenged to just get a stop against the Ravens on the ground. On the day, Baltimore 215 yards on a whopping 41 attempts, a 5.1 yards per carry total that just isn’t good enough.

The Steelers just weren’t a good team on Sunday between the turnovers and lack of run defense. That meant they had to take advantage of the opportunities they had to score, and they couldn’t with the turnovers and obviously the blocked kick, which was probably the biggest play in the game. Credit to Horton for recognizing something in the Steelers’ blocking scheme, and Campbell, with nine career blocked kicks, is a guy who clearly knows what he’s doing on special teams, especially in field goal situations. It was a tough break on a day full of them, and as a result, the Steelers are now 5-8.