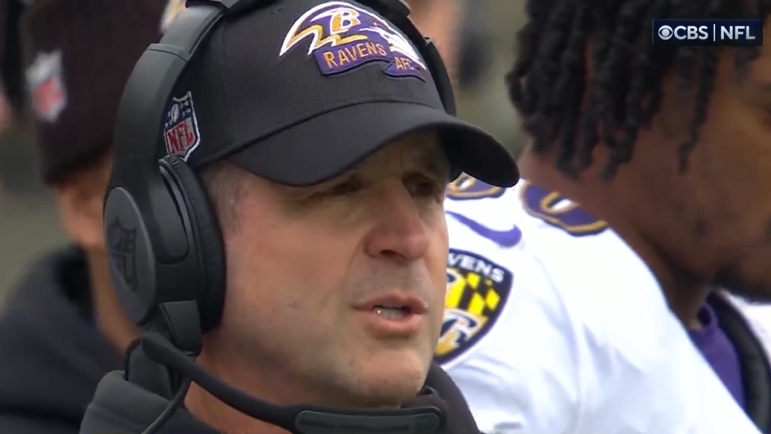 It’s not exactly a freefall, but the Baltimore Ravens haven’t been in too good of a place for the past month, roughly since the bye week. While they’ve won three out of five games, scoring has plummeted. The only time they scored more than 16 points, they lost, and they likely should have lost the game in which they scored 16 as well.

Of course, star quarterback Lamar Jackson has been out for the bulk of the past three games, going down with an injury against the Denver Broncos. Tyler Huntley has started the past two games, most recently losing 13-3 to the Cleveland Browns.

While Baltimore still controls its playoff destiny—win out and they win the AFC North—they are now a game behind the Cincinnati Bengals and at 9-5 are losing ground generally. Getting Jackson back will be a huge help, but is it time for change?

“No, we’re not getting into all that,” Ravens head coach John Harbaugh said when asked about the possibility of a shakeup in the coaching staff. “You guys can talk about all that; I respect that. I love the fans talking about everything they can talk about. We’re together, man; we’re a team.”

The primary subject of conversation had been offensive coordinator Greg Roman, with Baltimore averaging 11.8 points per game over the past five weeks. Outside linebacker Tyus Bowser apparently even shared a post on social media calling for Roman’s firing, though Harbaugh claims they spoke about it and it was innocent.

Shockingly, though, it doesn’t appear as though the Ravens—or just about every other team in every other situation—have any intentions of making decisions about their employees based on how segments of the fan base might feel about the subject on a particular week.

“All the end of the bar-type conversation is for the people sitting at the end of the bar,” Harbaugh said. “We’re going to work hard to do the best we can and give them something to celebrate come Saturday afternoon; that’s our goal, because we want it to be great, and we want our fans to be happy with it and be excited about it.”

Basically, we get that you’re frustrated, but let us do our job and we’ll do everything we can to try to get it right. Although I would be remiss if I failed to mention that the Ravens fired an offensive coordinator mid-season under Harbaugh twice before, and the first time, they won the Super Bowl. I’m not sure ‘third time’s the charm’ applies though when the first time was already charmed.