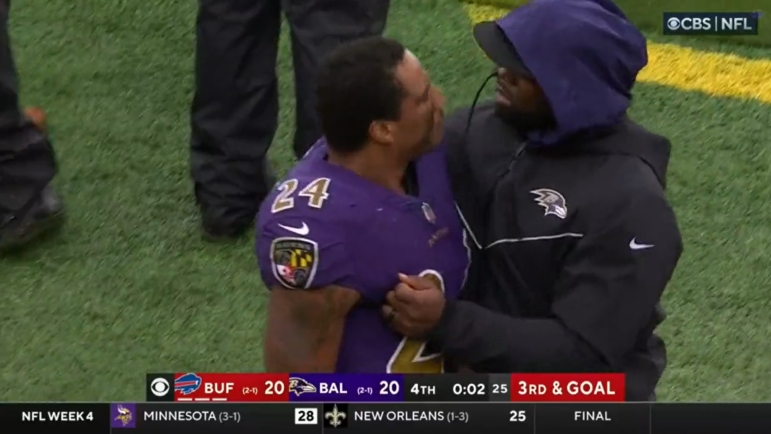 The Baltimore Ravens haven’t lost many games this year, but when they have it’s been in frustrating fashion, giving up leads in the fourth quarter. Perhaps the most maddening was back in week four against the Buffalo Bills. Entering the fourth quarter tied, they passed up an opportunity to go ahead by a field goal with 4:15 to play, attempting a touchdown on 4th and goal from the two.

It was a fair gamble. The Bills are one of the most high-powered and highest-scoring offenses in the game, and amongst the most explosive, so there was no question that they could traverse the field in field goal range from the two with four minutes to go—plus they had all their timeouts.

It didn’t work out, however. Quarterback Lamar Jackson was intercepted and Josh Allen and company took over from the 20 instead, kicking the game-winning field goal 57 yards and four minutes later as time expired. Cornerback Marcus Peters erupted at head coach John Harbaugh for the decision to go for the touchdown rather than take the points. Earlier this week, he explained why.

“I think the biggest thing for us as a team is that I hate the fact that we get looked at as Lamar and the Ravens”, he said. “I love the s— out of him, man, and I just hate that. I hate that that much pressure can be on one person, man, and the rest of the team. Just sometimes you get caught looking from the outside in, but no. I let him know all the time, man, ‘We out there with you’. We got to play our part at that point of time in-game, man. It was our duty to go stop [them]. I wanted that to be on us”.

It’s a respectable and understandable point of view, even if Peters doesn’t have the best track record throughout his career of most prudently expressing his point of view—which is why he found himself bouncing from team to team after seemingly finding a home in Baltimore in spite of his excellence on the field.

But of course it’s the players’ jobs to believe in themselves. It’s the head coaches’ jobs to make the best football decisions for their teams, and the decision that Harbaugh made, given the quality of opponent and the time remaining in the game, made a fair decision under those circumstances. It just didn’t work out as planned.

Chances are excellent that Buffalo would have at least matched a field goal and sent the game into overtime, but there’s a fair or more than fair chance that Allen would have put the ball in the end zone as well and stolen the game that way.

At least with a touchdown you force them to match the points just to play for extra time, unless they decide to go for two—something the Jacksonville Jaguars just did against them successfully on Sunday (sorry berad).