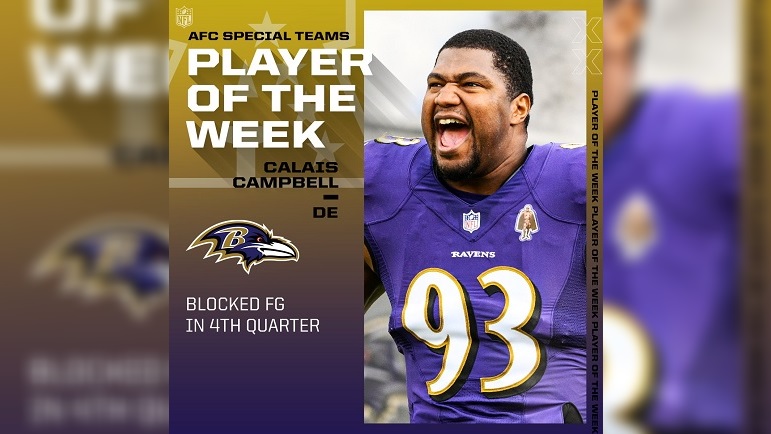 Baltimore Ravens’ DL Calais Campbell was named the AFC’s Special Teams Player of the Week for his crucial blocked field goal against the Pittsburgh Steelers Sunday, helping lead to a Ravens 16-14 win. Campbell earned honors for this moment in the second half of this past weekend’s game, denying Chris Boswell the chance to make it a 13-10 game and cut into the Ravens’ lead.

Here’s a look at Campbell’s block. Aligned in the A-gap after a last-second adjustment by the Ravens’ special teams coach, he easily swatted this one away.

As Ryan Mink notes, Campbell is the most successful field goal blocker of his era, now nine in his career. Speaking to reporters Tuesday, Mike Tomlin said Campbell was a guy the team talked about early in the week. But they didn’t follow through.

“Just gotta compliment that guy,” Tomlin said yesterday. “He’s the most significant and accomplished kick blocker in our game today. We knew it. We talked about it in this setting leading up to the game and still, he delivered a timely splash play in that area.”

It was one of three trips the Steelers came away empty-handed. They also threw two interceptions deep into Ravens’ territory, in essence taking nine points off the board in a two-point loss. Now 5-8, the Steelers’ season is nearly mathematically over and there are even scenarios where Pittsburgh is officially eliminated after this Sunday.

Around the rest of the AFC, Jacksonville Jaguars’ QB Trevor Lawrence and New England Patriots’ EDGE Josh Uche were the other AFC Player of the Week recipients. Lawrence went 30/42 in a 36-22 win over the Tennessee Titans, throwing three touchdowns to no interceptions in the win. Lawrence has taken a clear leap in his second year and is emerging as a top young quarterback in football. Uche has also come on strong and his bend off the edge is rare, recording three sacks as the Patriots beat the Arizona Cardinals 27-13.