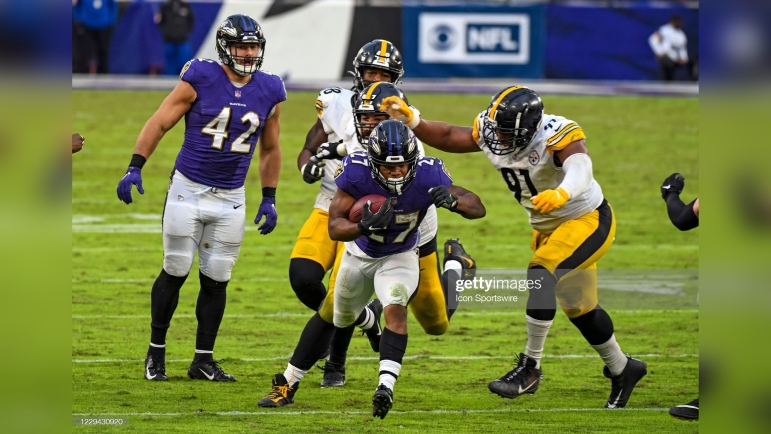 The Baltimore Ravens are getting healthier, activating RB J.K. Dobbins and S Marcus Williams off IR and to the team’s 53-man roster. Both are expected to play in tomorrow’s game against the Pittsburgh Steelers.

The Ravens hinted at the Dobbins’ move earlier Saturday when they waived RB Mike Davis in order to clear the way for Dobbins’ spot on the active roster.

Dobbins has battled injuries throughout the year and had been IR for the last two months after underdoing arthroscopic knee surgery. He also missed the first two weeks of the season recovering from an ACL injury he suffered last summer.

On the year, Dobbins has appeared in four games, carrying the ball 35 times for 123 yards (3.5 YPC) and one rushing touchdown while chipping in a receiving score. A short career dominated by injuries, Dobbins had a strong rookie year averaging 6.0 YPC with nine rushing touchdowns. But his entire sophomore season was lost to that torn ACL while he’s struggled to stay on the field this year.

He’s only appeared in one game against the Steelers but it was an impressive one. In 2020, he carried the ball 15 times for 113 yards in a 28-24 loss to Pittsburgh.

Dobbins will revert back into a mix of Ravens’ running backs in what should be the ultimate committee approach. He’ll join veteran Kenyan Drake, Gus Edwards, and Justice Hill with the goal of helping backup QB Tyler Huntley, expected to start for the injured Lamar Jackson.

Williams is an underrated addition overshadowed by Dobbins’ return. Signed to a massive contract this offseason, he intercepted three passes in five games before suffering a wrist injury earlier in the year. He’ll give the Ravens an incredibly potent secondary along with the likes of Marlon Humphrey, Marcus Peters, Kyle Hamilton, Chuck Clark, and Geno Stone.

With Lamar Jackson listed as doubtful for Sunday vs. the Steelers, the Ravens elevated QB Anthony Brown from the practice squad to the active roster, making him Baltimore’s likely backup QB to starting QB Tyler Huntley.