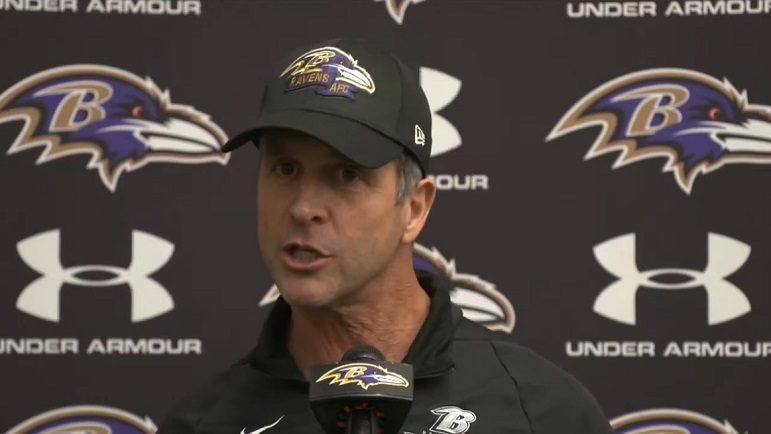 Great rivalries that span an entire era have to have some point of consistency. Often it’s a quarterback, but it can also be those off the field—like head coaches. For the Pittsburgh Steelers and the Baltimore Ravens, head coaches Mike Tomlin and John Harbaugh have presided over this rivalry for 16 and 15 seasons, respectively.

They’re two of the longest-tenured head coaches in the league, which is saying something considering they’re division rivals that they have been able to compete against one another for so long without bumping each other off by remaining competitive.

The Ravens barely got the edge over Pittsburgh earlier this year in a game in which they missed two field goals and lost by two points, but it was another highly competitive contest that should prove to give way to a fitting encore this Sunday night when they meet up again.

But might we see the two head coaches square off before the game, as well? Harbaugh was asked on Wednesday if head coaches, like players, find that they ‘get up’ more for a game against a premiere opponent like Tomlin. He admitted there is some of that—and hearkened back to their playing days, saying he thinks he can take Tomlin today, even though he’s a decade older.

“Mike was a receiver, I was a defensive back. I don’t know what kind of receiver he was back in the day. I might not have been the best defensive back ever, but as I look at him right now, I feel like I would have a chance to stay with him”, he said, via the Ravens’ website. “I really do. I don’t know what that means, but is that something anybody would pay to see?…You’ve got  $5 on it? That’s probably about what it’d be worth”.

John Harbaugh thinks he could cover Mike Tomlin #Steelers #NFL 🤣💀
"I don’t know what kind of a receiver he was back in the day. I might not have been the best defensive back ever, but as I look at him right now, I feel like I’d have a chance to stay with him, I really do." pic.twitter.com/hYV1HeXUM3

Tomlin played for five seasons at William & Mary from 1990-1994, including a three-year stint as a starter. He caught 101 passes during his time there for 2054 yards and 20 touchdowns and was selected as an All-Conference performer in his senior season. His 20.2-yard per-catch average was a school record.

Harbaugh attended Miami (of Ohio) between 1981-1984. He lettered for the Redhawks in 1983 and failed to record an interception. He did win the Football Scholar Athlete Award while he was there, so that’s something I suppose.

I’m sorry to say for Harbaugh’s sake but I think he’s barking up the wrong tree on this one. Tomlin might have a spare tire since his playing days, but I bet he can get off the line reasonably well in comparison to whatever the 60-year-old Harbaugh expects to do.

Tomlin had legitimate talent as a college football player as his numbers bear out. It wasn’t enough to make it at the next level, of course, and both quickly entered the coaching ranks thereafter. Now they’re both Super Bowl champions and well-regarded in their profession. They have nothing to prove athletically on a football field.