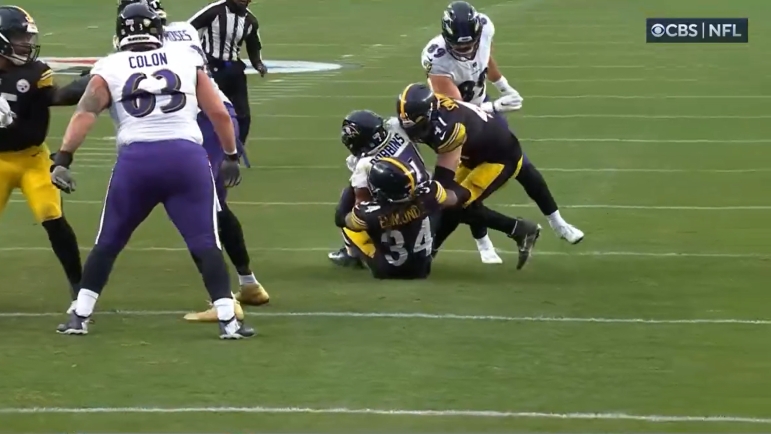 Three interceptions — two deep in Baltimore territory — and a blocked field goal, along with the inability to do anything to stop the run game led to a rather frustrating 16-14 Pittsburgh Steelers loss to the Baltimore Ravens Sunday at Acrisure Stadium, all but putting the final nail in the coffin of the Steelers’ season, dropping them to 5-8 on the season.

Once rookie quarterback Mitch Trubisky was inserted into the game following an injury to rookie Kenny Pickett, the Steelers offense had a bit of a spark, at least until Trubisky threw three interceptions — two of which came in scoring position — all but sinking the Steelers chances on the day.

Defensively it wasn’t much better for the Steelers as Baltimore ran at will on Pittsburgh’s defensive front to the tune of 215 yards and a touchdown on 42 carries, putting the game away down the stretch. That led to a painful loss for the Steelers in a couple of ways: a loss in the rivalry matchup for the first time in three seasons and a significant blow to the playoff hopes that were already slim.

When Trubisky came into the game in relief of Pickett, he provided a real spark initially, leading the Steelers on a scoring drive thanks to a big completion downfield to rookie George Pickens for 42 yards. After that, things fizzled out a bit, in large part due to the turnovers.

Trubisky had some success being aggressive overall, finding Pickens downfield on a 25-yarder later in the game and also connected with Diontae Johnson on a 37-yard shot play. That aggressiveness bit him in a big way though as he threw three crucial interceptions, with two coming in scoring position for the Steelers.

He didn’t use his eyes well in the middle of the field and was read like a book by Baltimore linebackers Roquan Smith and Patrick Queen, and then later overthrew Johnson on an ill-advised shot play that safety Marcus Williams ran underneath for an easy interception.

The numbers don’t look all that bad on paper (22-of-30, 276 yards) but the three interceptions were back-breaking and ultimately did in the Steelers in a one-possession game. You can’t have those mistakes from a veteran quarterback, even if he was coming off the bench cold for the first time since Week 6 against Tampa Bay.

After playing rather well since the bye week, the running back room came to a bit of a halt Sunday against one of the better run defenses in football, which wasn’t all that surprising.

Against the Ravens, Najee Harris rushed for just 33 yards on 12 carries, though he did add a 1-yard touchdown. It was tough sledding for the second-year pro, who really had no room throughout the matchup as the Ravens controlled the line of scrimmage. Harris added two catches for 17 yards, including a long of 10, but was mostly a non-factor in the second half with the Steelers trailing.

Jaylen Warren and Benny Snell Jr. weren’t a factor either in the ground game. Warren had 11 rushing yards on three carries and Snell added four yards on three carries. Warren had one of the better plays of the day for the running backs though on a checkdown out of the backfield from Trubisky, which he turned into a 14-yard catch and run, forcing defenders to miss in space to move the chains on third down.

Following his outburst last week against the Falcons due to his frustration with a lack of targets, George Pickens had a productive day on Sunday against the Ravens. While he saw just three targets in the loss, he hauled in all three for 78 yards, including a 42-yard grab down the left sideline between two Ravens defenders and then a 25-yard back-shoulder sideline tightrope to move the chains.

He needs more targets though. He’s too good of a receiver to see just three targets.

Diontae Johnson had a productive day as well, shaking off some issues from last week against the Falcons. Johnson finished with six catches for 82 yards in the loss, including a 37-yard catch down the far sideline from Trubisky in the fourth quarter with the Steelers scrambling to score and make it a one-possession game. He has to stop running backward after catches though. It’s infuriating.

Steven Sims saw four targets in the loss, finishing with four catches for 30 yards. He made some defenders miss on a key third-down conversion in the first half, but it’s quite clear the Steelers are severely limited in the slot with Sims and Gunner Olszewski, who had just one catch for seven yards and had a key drop later in the game.

Pat Freiermuth continues to develop into one of the top tight ends in all of football at this point. He’s a force after the catch and has terrific hands overall. Problem is, Trubisky tried to force the ball to him twice in the loss, leading to those two interceptions.

On the day, Freiermuth finished with three catches for 33 yards and a late touchdown from Trubisky over the middle. He was targeted six times in the loss and is very clearly a focal point in the passing game, utilizing the middle of the field.

Connor Heyward made a terrific 13-yard grab over the middle from Trubisky late, taking a shot in the process but holding on for the chain-moving catch. He’s a legitimate football player and needs to be utilized more in the passing game.

Zach Gentry had a painful drop in the first half and wasn’t targeted again in the loss. Outside of the passing game, the tight ends weren’t much of a factor in the run game. They struggled to move guys off the ball and really labored to create lanes at times. They’ll need to get back on track next week.

After putting together some strong performances in recent weeks, Sunday was a major step backward for the Steelers’ offensive line. It started right away on the first drive as a miscommunication between Kevin Dotson and Mason Cole allowed a free rusher through the A-gap at Pickett, who was ultimately concussed on the play.

In total, the Steelers offensive line allowed two sacks and six quarterback hits in the loss. The Steelers also rushed for just 65 yards on 20 carries, being able to do very little in the early stages of the game on the ground before abandoning it when trailing in the second half.

Add in a holding call on Dan Moore Jr. in the first half and it was a rather rough day overall for the offensive line.

While the offensive line struggled mightily, the defensive line might have been the worst unit on the field for the Steelers in the 16-14 loss.

The Ravens ran all over the Pittsburgh Steelers in the win, bullying the black and gold at the point of attack, rushing for 215 yards and a touchdown in the win on 42 carries. The Steelers knew what was coming and had no answer.

Larry Ogunjobi, Montravius Adams, Tyson Alualu and Chris Wormley were pushed around throughout the day as the Ravens largely ran away from Cameron Heyward. Even then, Heyward finished with six tackles and a tackle for loss.

Guys just couldn’t get off blocks, and in the process of trying to fight off blocks, they were pushed off the line of scrimmage as the Ravens owned the trenches.

Alualu and Wormley combined for half a sack, and Wormley forced a fumble in the loss before exiting with a knee injury. Adams was called for a defensive holding penalty for the second straight week, too. It was very, very ugly in the trenches for the Steelers Sunday.

T.J. Watt is playing through a rib issue that is clearly hampering him from a pass rush perspective, but he was still impactful on Sunday as the best Steelers linebacker on the day, finishing with five tackles and a sack. He’s going to fight his tail off every single play, but sometimes that backfired on him Sunday as he hunted for game-changing plays, losing his rush lane at times, allowing Tyler Huntley to escape outside.

Alex Highsmith played the run well opposite Watt, utilizing great backside pursuit to track down ball carriers. As a pass rusher though, he was mostly non-existent, which was disheartening.

Inside, Devin Bush and Myles Jack were a mess, in large part due to the defensive line not being able to hold up. Jack and Bush were swallowed up by the Ravens offensive line reaching the second level time and time again and were completely out of position on J.K. Dobbins’ 44-yard run in the first quarter.

Though they combined for 13 tackles and two tackles for loss, they were not much of an impact at all.

The Ravens passed for just 104 yards in the win. While that is remarkable for the Steelers secondary, it’s extremely disheartening for the defense overall as everyone knew what the Ravens were going to do in the second half and the Steelers had no answers.

Minkah Fitzpatrick was the best player on the field for the Steelers Sunday, finishing with a game-high 11 tackles. He played with serious force coming downhill, laying the wood to Huntley multiple times in the matchup, ultimately knocking him from the game in the second half.

Terrell Edmunds was sound in the box for the Steelers, finishing with nine tackles in the losing effort. He was an extra linebacker essentially and did a good job finding the football while also taking tight end Mark Andrews away early on in the matchup.

Cameron Sutton played a great football game, starting it off with a bang with two key plays on the Ravens’ first drive. He was a shutdown guy out there for the Steelers and is an integral secondary piece moving forward.

Levi Wallace, James Pierre and Arthur Maulet recorded three tackles each in the loss. Wallace played the run relatively well and was never challenged in the passing game, while Pierre was beat once by DeSean Jackson down the sideline for a 25-yard catch.

Lately, it feels like a few steps forward and then one colossal step back for Danny Smith’s unit this season.

Sunday was that colossal step back for the Steelers’ special teams.

Calais Campbell blocked a Chris Boswell field goal from the A-gap, Pressley Harvin III was an absolute disaster punting the football, and Steven Sims was an absolute adventure — in a bad way — on punt returns.

Campbell is a known commodity when it comes to blocking field goals. No excuses for allowing him to get a hand on the field goal attempt from the A-gap.

Harvin had a 17-yard punt in the first half — 17 yards! — and then later had a punt bounce into the end zone when the Steelers were trying to pin the Ravens deep, resulting in a punt of 28 yards. Consistency is a major issue with him and the Steelers just need to figure out the position moving forward.

Sims seems like he’s trying to do too much back there in the punt return game. While he has the chance to break off big runs, he’s nerve-wracking trying to catch the ball first. Just an ugly, ugly day overall for the Steelers on special teams. Doesn’t get much worse.