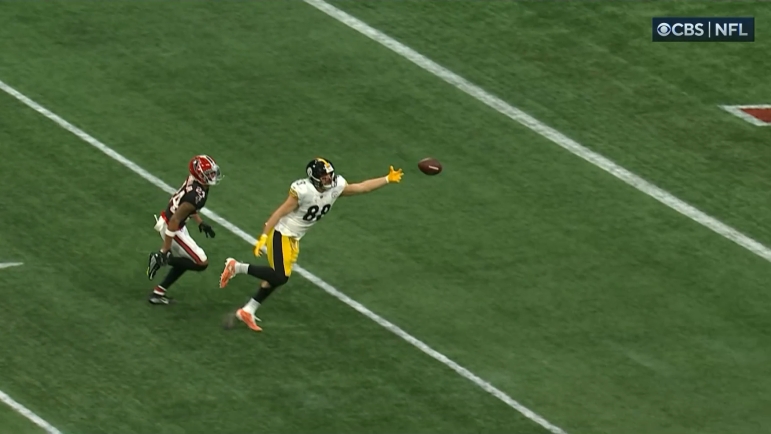 The Pittsburgh Steelers offense had three trips to the red zone and a few trips just outside the red zone in the team’s 19-17 road win over the Atlanta Falcons on Sunday. However, the team could only manage one touchdown, a 17-yard strike from quarterback Kenny Pickett to tight end Connor Heyward for Heyward’s first career touchdown. While Pittsburgh’s defense was able to hold on, ideally the Steelers would like to get in the end zone more than once, especially when they’re successfully driving the ball down the field. Talking to the media after the game, Pickett discussed what the team could’ve done to try and score more touchdowns.

“I think connecting on the one to Pat [Freiermuth], I gotta give him a better ball and put it on him. And then the penalties when we got backed up, obviously hurt us in there. So those are two things that stuck out off the bat. I definitely need to put a better pass out there for Pat, he would’ve scored there as well,” Pickett said via the team’s YouTube channel.

The play to Freiermuth that Pickett is talking about came on the team’s 2nd drive of the game. On 2nd and 11 from the Atlanta 28, Pickett had Freiermuth open over the middle of the field, but he overthrew him and Pittsburgh had to settle for another Matthew Wright field goal. Pickett is right that it would’ve been a touchdown. Freiermuth had split between two defenders, and if the ball was put on him, he would’ve scored. The drive ended up being a 12-play drive that took 5:23 off the clock, and with those long, sustained drives, settling for a field goal doesn’t feel nearly as good as capping the drive off with a touchdown. Pittsburgh’s opening drive was similar, as the team ran 16 plays and possessed the ball for 7:27 but had to settle for three points after not being to advance beyond the Atlanta 23.

On the next possession, Freiermuth busted off a 57-yard catch-and-run, which was the second-longest play for a Steelers’ tight end under Mike Tomlin, only trailing the 75-yard touchdown by Vance McDonald in 2018 on Monday Night Football against the Tampa Bay Buccaneers. That play set up a 17-yard touchdown to tight end Connor Heyward, which was the first of his NFL career

Later in the game, the team had 1st and 10 on the Atlanta 14 with 6:45 to go in the third quarter. Wide receiver Diontae Johnson fell over before the snap, leading to a false start penalty that knocked Pittsburgh back five yards, and from there they got hit with a delay of game penalty two plays later that knocked them back even further, meaning they once again had to settle for a field goal after a 14-play, 75-yard drive that took 7:36 off the clock.

Obviously, long drives are important to have and they not only help your defense rest and recover on the sideline, but they just keep the ball away from the opposing offense and limit the time they have to score. But you want to score touchdowns and not give the other team a chance to come back and tie or take the lead. After a long drive, you want to punch the ball in and make the other team come out after 7+ plus minutes on the bench and try to answer. The Steelers weren’t able to do that today.

Luckily, it didn’t come back to bite them, as they ended up winning the game and Wright was good on his four field goal tries. But this team has to do a better job of punching the ball in the end zone when they get inside the opponent’s 25. It’s been a problem all year long, and it’s one of the most important things for this team to work on in the weeks ahead.