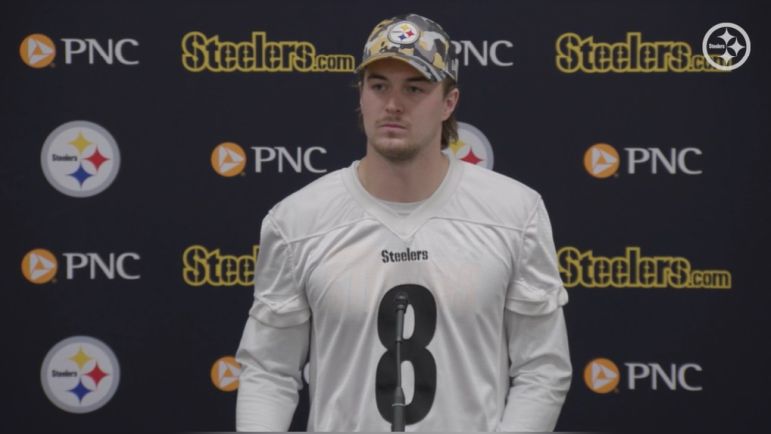 You gotta crawl before you can run. And sometimes you gotta lose before you can win. Weeks ago in one of Kenny Pickett’s first starts, he and the Pittsburgh Steelers’ offense couldn’t put the ball in the end zone to beat the Miami Dolphins, falling 16-10 despite a great defensive effort. They wouldn’t write the same story Saturday evening against the Las Vegas Raiders.

Speaking to reporters as he does every Wednesday, QB Kenny Pickett says those tough lessons in a loss carried the offense to victory this past weekend.

“The growth of going down there and finishing the game,” Pickett said via Steelers.com. “Early in the season the Miami game didn’t go that way, but I think we all used that experience to help us out here at the end.”

Against Miami, Pittsburgh had repeated chances to drive the field and win the game. Pickett moved the offense on their two final drives for 52 and 62 yards but each possession ended in a back-breaking interception. One where Pickett didn’t see lurking FS Jevon Holland and another where miscommunication between Pickett and WR Diontae Johnson lead to an end zone INT.

There wouldn’t be a sad ending against the Raiders. Trailing 10-6 with 2:55 left, Pickett took the Steelers on a ten-play, 76-yard drive capped off by Pickett hitting George Pickens on a skinny post for the game-winning score.

Pickett most often hit check-downs to RB Najee Harris and TE Pat Freiermuth but he also made plays outside of structure, protected the football, and ultimately, took his shot when he saw the opportunity.

As Mike Tomlin said postgame, it was a grow-up moment for Pickett and this entire young offense.

“It was a big moment. I think you saw a lot of guys stand up. Even after the two-minute drill, we had Connor Ice the game when that jet sweep. So it’s another young guy stepping up in a big moment and closing it out.”

Heyward’s first NFL carry was a memorable one, a 21-yard gain with him smartly sliding inbounds and securing the win. Still, Pickett has a veteran presence for being a rookie, in part due to being an older first-year player who spent five years at Pitt, and he understands the Steelers must build on their late-game success.

“It’s a step in the right direction. But I mean, I’m not gonna overdo it. We did what we were supposed to do…it’s a huge positive force but now we obviously have to turn the page and get ready for this one.”

Sunday night’s game against the Ravens figures to be a low-scoring one. Pittsburgh/Baltimore games are always tight and neither offense has been prolific. The Steelers have struggled all year while the Ravens’ offense has tanked without Lamar Jackson. Meaning, Sunday’s game could come down to another late-game drive. The Steelers aren’t crawling. They’re walking. Now they have to run.