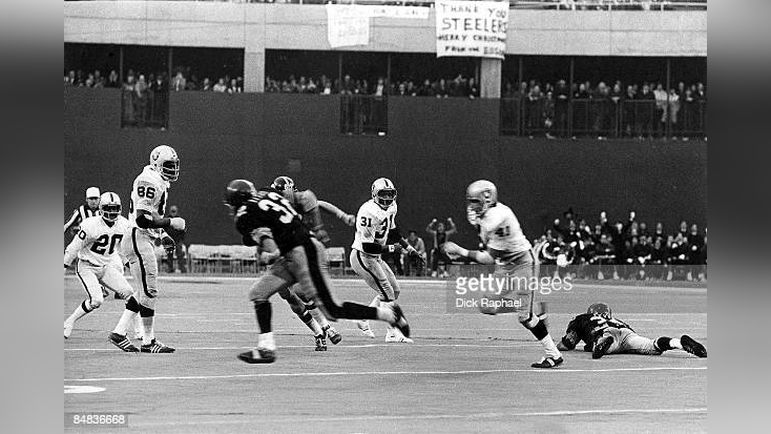 (Editor’s Note: This article was written before the news of Franco Harris’ death).

On Christmas Eve, the Raiders game marks the 50th anniversary of the Immaculate Reception. Alex Kozora discussed Mike Tomlin’s comments on the importance of the game to the Pittsburgh Steelers.

The median age of Americans in 2022 is nearly 39 years. So roughly half of Steelers Nation was born more than a decade after that game. Roughly 23% of Americans are 60 years old or more. Which means most Steelers fans were either not alive or not old enough to have a direct memory of those days.

I was a high school sophomore living in Potomac, Maryland in December 1972. Our family moved from Pittsburgh  in 1965. But in 1972, the Pittsburgh Pirates were my favorite sports team. Pittsburgh was a baseball town and the Pirates winning the World Series in 1960 and 1971 made them the favorite sports team in town. My favorite athletes included Willie Stargell, Manny Sanguillen, Bob Veale, Matty Alou, Bill Mazeroski, and of course, Roberto Clemente. Not a Steelers player among them. As youngsters, we would imitate their batting stances and swings.

As Al Abrams of the Pittsburgh Post-Gazette reported at the time:

“Some of the people I met yesterday (at the NFL Draft) were surprised that the Steelers selected Franco Harris over his Penn State teammate Lydell Mitchell …. The reasoning behind the move is understandable. Harris, a fullback, is bigger than Mitchell and besides speed, he has the power to knock down and run over defensive people. Harris, I am told, is a tremendous blocker. He cleaned out the opposition for some of Mitchell‘s long runs.”

As for the game. I do not recall seeing it live. I may have seen it in Maryland. But if you lived in the Pittsburgh area you had to be one of the 50,327 people in the stadium to see it live. NFL rules at the game blacked the game out. The closest NBC affiliates permitted to air the game live were in Erie and Cleveland, Ohio. The capacity of Three Rivers for football in 1972 was 50,350. So, up to 23 no-shows missed the game of ages.

Immaculate Trivia of the Game

The Immaculate Reception has been viewed countless times over the past 50 years. A couple points prior to the play.

Some Nuggets About the Play

Tight end John McMakin laid a block to help spring Franco as he raced down the field into history. Chuck Noll sent the play in. Frenchy Fuqua adjusted as Terry Bradshaw scrambled to his right under pressure. Franco Harris assigned pass protection. But as the play shifted away he had no one in front of him. In his words from an article published the day after the game, “I wasn’t supposed to be there. But when I saw Terry throwing the ball I started running to block if Frenchy caught the ball. I saw Frenchy and Tatum go up. I saw the ball go in the air and I said, ‘Oh no! Wow! This is it.’ But the ball bounced toward me …. Reaction moves your hands.”

Did Frenchy Fuqua touch the ball first or did it carom off Jack Tatum’s shoulder. Frenchy always loquacious still isn’t revealing what happened to this day. Engineers have studied available films concluding that it did come off of Taum based on the directions that Fuqua and Taum were running and the path of the deflected ball. But they may be based in Pittsburgh. John Madden too shocked to be angry at the time complained about the officiating: “I think they had the flags sewn in their pockets.”

And Terry Bradshaw’s reaction when asked if it was just a lucky play: “Luck? Sure, we were lucky. After 40 years, why shouldn’t we be? Who deserves it more?”

The following week, Pittsburgh hosted the undefeated Miami Dolphins for the Conference championship with a standing room only crowd of 50, 845 on hand. However, there were no miracles in this game. The Steelers fell 21-17. But frankly, I have no memory of that game.

That night, Roberto Clemente boarded a cargo aircraft destined for Nicaragua. Managua had been devastated by an earthquake on December 23, the same day as the Immaculate Reception. Clemente arranged several relief flights to be flown to Managua. Upon learning that the cargo from the first three flights did not reach people in need, Roberto decided to accompany the fourth flight believing that government officials would be more responsive in his presence. He was warned by folks at the airport that the aircraft was poorly maintained and overloaded. He boarded anyway.

In the darkness, people heard the aircraft in trouble, and it crashed into the sea. For days people held out hope that Roberto somehow managed to get on a life raft or cling to some wreckage. Only the body of the pilot was ever found. Folks that attend Pirates games may see Manny Sanguillen there by his barbecue stand. He is the only Pirates player that did not attend a memorial service for Roberto Clemente in the days after the crash. Instead, he was diving off of Isla Verde searching for his friend. Roberto Clemente and three other people were never found.

A couple things that the Immaculate Reception ingrained in me. On the field, the player away from the ball can play an important role. Put yourself in a position to contribute. Just don’t stand around, if your assignment is over, converge to the ball. And until the whistle is blown, there is still a chance.

From dear Roberto, on a “night that happiness died.”  Always be ready to help others less fortunate than yourself without delay.  In his words, “…you never know what can happen tomorrow.”

I always like to offer a music selection. Instead of one song, here is a link to some of the top songs of 1972.