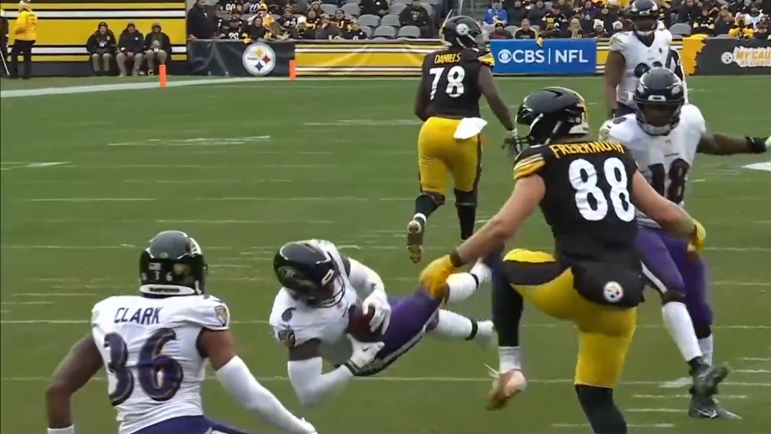 In case you wondered how important tape study is to success in the NFL, all you really need to do is take a closer look at how defenses have been playing the Pittsburgh Steelers this year and what defenders have been saying after (and sometimes even before) games about what they expected to see.

While there was a cornucopia of flaws involved contributing to their three interceptions thrown against the Baltimore Ravens, the truth is that the fatal flaw was predictability. Yes, Steven Sims erred in his route. Yes, Mitch Trubisky stared down Pat Freiermuth. Yes, Freiermuth got jammed.

But Ravens linebacker Patrick Queen already knew where Freiermuth was going well before the ball came out because he’s seen it time and time again on tape this year. The Steelers’ offense doesn’t have many tendency breakers, so defenses can generally trust that what they see on tape is what they’re going to see in-game.

Speaking to reporters on Tuesday, Queen, who first intercepted Trubisky, was asked whether or not he was able to get a beat on the ball based on how he reacted to it. And of course, he did, which you can see by watching. “Yes, I figured,” he said, via the team’s website.

“There were two wide receivers over here, [and No.] ’88’ on the other side, so I just knew there were like three things he runs from over there,” he said, referring to the variety of options he’s seen Freiermuth run on tape. “So, I just already knew what he was about to do.”

Now, let’s make this clear. Things like this happen to every team. Everybody has tendencies. Sometimes there are just situations where the thing to do is obvious and it’s just a matter of executing it better than the defense can defend it.

Everybody in the league does tape study to try to guess what a team is going to do, and they use that tape study to decide their course of action and how to play things. You work the odds. The odds were that the Steelers were going to have Freiermuth do on this play in this situation in this spot on the field what he did.

Queen knew that and he got a football for his efforts, not to mention a takeaway in the red zone. I’m sure you’re tired of hearing defenders talk about how they knew what was going to happen before it happened, though.

And it’s not like there’s nothing that can be done about it. As I said earlier, you can at least minimize the impact by establishing tendency-breakers, plays that are run from the same or similar packages in the same or similar situations that do different things. Or the same plays from different packages in different situations. The less your opponent can guess what play will be run when, the better. A simple principle but, in fairness, not so easy to execute.