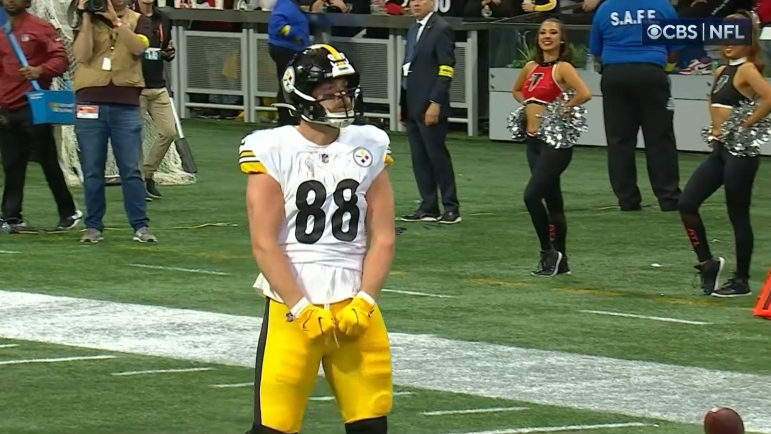 Pat Freiermuth isn’t Heath Miller. I don’t know if he ever will be. He’s not in the same stratosphere Miller was as a blocker. But what they have in common as receivers is eerily similar. Sure-handed, totally trusted, and absolute machines on third down. What Freiermuth has done as a receiver this year should be considered a sophomore jump and the trust the Steelers cast of new quarterbacks have shown in him jumps off the page.

Ever since JuJu Smith-Schuster went down early into last year, Freiermuth’s taken over as “the guy” on those weighty downs Mike Tomlin always talks about. Third down, the gotta-have-it moments to sustain a drive or send out the punt team. In those situations, Freiermuth is the Steelers’ guy.

Across the team, Freiermuth is the clear-cut #1 option on third down. Here’s where his numbers – targets, receptions, yards, touchdowns, and first downs – stand on third down passes.

First place across the board and he’s even missed time along the way due to a concussion. He has one more target than any other Steeler, four more receptions, 23 more yards, and two more first downs.

But that’s probably intuitive if you watch the games. Where does that stack up among all NFL tight ends? Freiermuth isn’t at the top but he sure is close. Here are those third down numbers.

Top four across the board here. The only tight end with more targets than Freiermuth’s 27 is Travis Kelce’s 27 (Freiermuth is tied with T.J. Hockenson) while those two, Kelce and Hockenson, are the only ones with more third downs. Freiermuth is also tied with Cincinnati’s Hayden Hurst in that category.

Freiermuth has a great feel and understanding for finding the soft spot in zone coverage, working away from leverage and settling down and anytime he drops the ball it’s a shock moment. He makes catches in traffic, sacrifices his body to make a play, and knows how to move the sticks. Here’s just one recent example. A curl on third down from the slot, Freiermuth sliding away from the safety coming down into the soft spot between him and the linebacker to make this catch and move the chains.

It’s an area he figures to excel in the rest of the season and the rest of his career. He’s a quarterback’s best friend and someone rookie Kenny Pickett has leaned on as he’s worked through his first season.