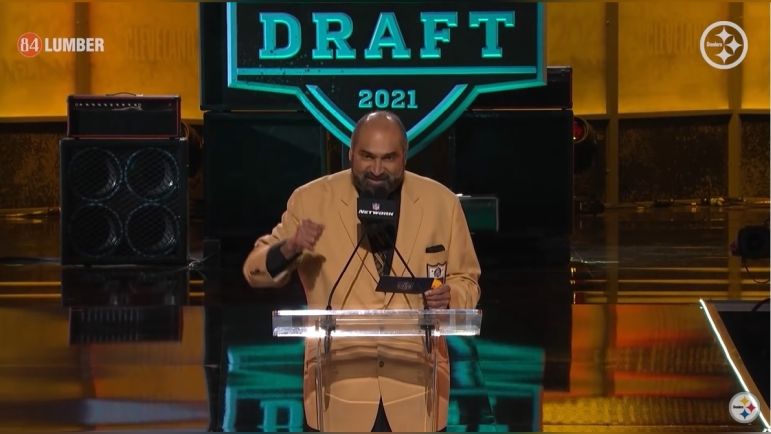 One of those players was Pat Freiermuth, a Penn State alum like Harris. The Trib’s Chris Adamski posted a video to Twitter in which Freiermuth detailed the relationship he had with Harris and the sadness he is feeling today.

Freiermuth, like Harris was highly successful at Penn State with both only staying three years at Happy Valley and each scoring double digit touchdowns for the Nittany Lions (Harris with 25 total and Freiermuth with 16). As Freiermuth mentioned, Harris announced him getting picked by the Steelers on April 30, 2021, a little over  49 years after Harris himself got picked by the Steelers in 1972.

To the man who announced me as a Pittsburgh Steeler, May you Rest in Peace. Very thankful for our friendship and you always being there for me when I needed it. Penn State and Steeler Legend forever. May your legacy live on forever. RIP 32.🙏🏻 pic.twitter.com/95ajLaiD7M

Since becoming a Steeler, Freiermuth has become close with Steelers legends, notably Heath Miller who Miller says Freiermuth has texted him before games. However, today Freiermuth gave an insight to how close Harris is with him and possibly other Steelers as he referenced in the video above how going out to dinner with Harris and his family.

Freiermuth went on to tell reporters he know Harris will still be there in spirit this weekend.

Pat Freiermuth, a fellow PSU alum announced as Steelers’ second-round pick by Franco, had a special relationship w/ him.

Freiermuth on this weekend’s planned events honoring the Immaculate Reception& Franco: “He might not be there in person, but he is gonna be there in heaven.”

Many people who have been part of the Steelers organization have said it is like one big family where alumni will drop in and see how people in the organization are doing and meet the new players. Harris, who stayed in Pittsburgh post career played a big part in that.

Harris will surely be missed by not only members of the Steelers organization, but also to fans across the globe who remembered him and and all the great moments he provided to the game of football.