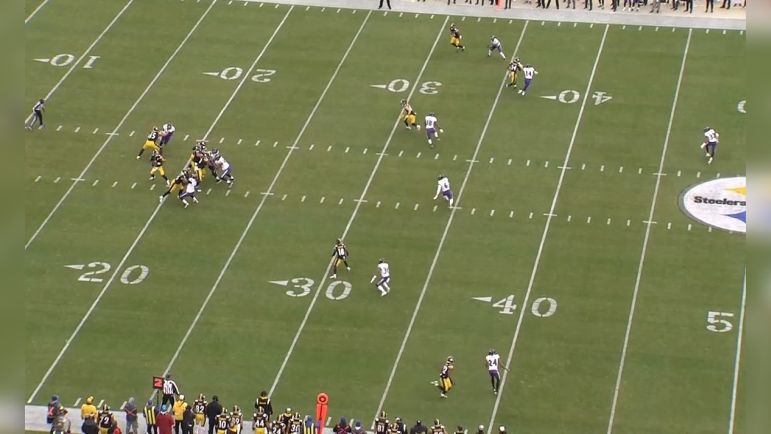 Even the most man-coverage heavy teams in the NFL play zone about half the time. And for most defenses, zone is the predominant coverage. For Diontae Johnson and the Pittsburgh Steelers, they must do a better job of winning against those looks. Speaking to reporters Wednesday, Johnson outlined where the pass game must improve for the offense to put up more points.

“We gotta beat a lot more zone coverages this week,” he said via Steelers.com. “We’ve been seeing a lot of zone lately the past games we’ve been playing…we’ve got the right plays dialed up to beat zone coverage. Coach T harping on that today about beating zone coverage. Because that’s what we’re going to see a lot more of in the weighty moments.”

In Week 14, Pittsburgh’s pass game moved the ball against the Ravens and backup QB Mitch Trubisky finished the game with 276 yards, the second most by a Steelers’ QB all season only trailing the 327 Kenny Pickett recorded in a blowout loss to the Buffalo Bills. But the offense hurt themselves with costly turnovers and to Johnson’s point, some of those came against zone looks where the Ravens’ talented inside linebackers robbed and picked Trubisky underneath.

Though Kenny Pickett played only a handful of snaps, Johnson’s comments about the team struggling against zone were most noticeable early in the game before Pickett was concussed. Pittsburgh came out throwing but struggled to get open against the Ravens’ zone. Here’s the first two snaps of the game, no receiver open and Pickett forced to scramble.

Johnson said beating zone has been a focal point of early gameplanning in team meetings.

“When they ran zone, we kinda struggled a little bit. We harped on that a lot this week. Being real sudden in our routes. Knowing the defense before the snap and having a plan at the line when you come off the ball.”

Baltimore’s secondary is an impressive group with top-flight corners in Marlon Humphrey and Marcus Peters. At safety, there’s a collection of talent in Marcus Williams, who picked Trubisky in the first meeting, along with 1st round rookie Kyle Hamilton and Geno Stone.

Though the Steelers’ focus has been and will be on the run game, the reality is Baltimore has the best run defense in football and winning on the ground will be tough sledding. The pass game will have to make plays and that means beating zone coverage if this team wants to beat the Ravens.