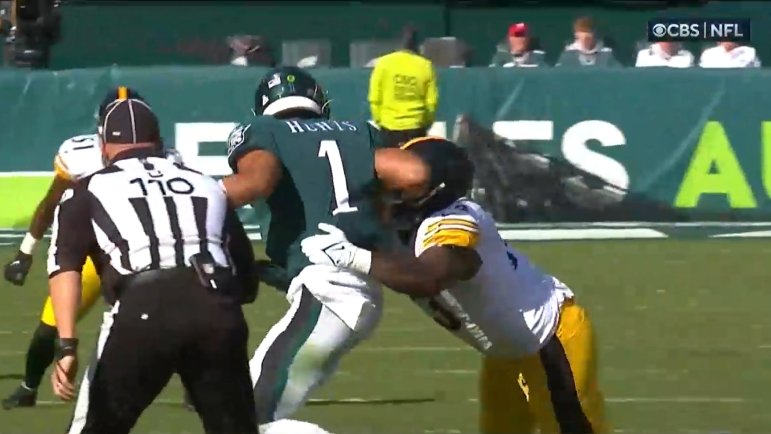 The Pittsburgh Steelers are reportedly signing defensive lineman Jonathan Marshall off of the New York Jets’ practice squad, a move likely to be made official today, perhaps even announced by the time that this article runs.

That’s not the point though. The point is that the move made was not to promote Carlos Davis from the practice squad, and what that could mean. A seventh-round pick in 2020 for the team, he has had his ups and downs, showing promise as a rookie, but he’s only dressed this season as an elevation due to injury from the practice squad.

With Chris Wormley set to be moved to the Reserve/Injured List after tearing his ACL in Sunday’s game, the Steelers chose to sign a defensive lineman off of another team’s practice squad rather than to promote Davis from within.

A player signed off of another team’s practice squad must count against their 53-man roster for a minimum of three weeks, so this move will last for at least most of the rest of the regular season; would they have done it if they intended to move ahead with Davis?

Almost assuredly not, and the fact that Davis has already been used for one elevation this season against the Philadelphia Eagles, playing 12 snaps and registering a sack, doesn’t play in his favor either. Players may be elevated for a game three times in a season.

Davis spent most of the 2021 season injured, even before he was moved to IR, getting hurt in the season opener. He did not play again until Week 15, then played three weeks in a row before being inactive for the season finale.

It doesn’t bode well for his future, to state the obvious, that the Steelers didn’t feel Davis was a sufficient in-house answer. They already have DeMarvin Leal, Tyson Alualu, and Isaiahh Loudermilk as other reserve linemen.

It’s quite possible that Marshall won’t even dress for these games, since they have seven defensive linemen and they have dressed both Leal and Loudermilk at times this year. They could dress him over the latter, however, or might even decide to make Alualu inactive.

A sixth-round pick last season by the New York Jets, the Arkansas product played in four games as a rookie, registering two tackles in 76 snaps. He has not played a snap so far this season. But having him on the roster allows them to get a long look at him over the final four weeks of the season to determine whether or not they would be interested in doing business with him for next season.

Can we say the same for Davis at this point? Perhaps not as confidently as we could a week ago, and even then it was far from a guarantee.