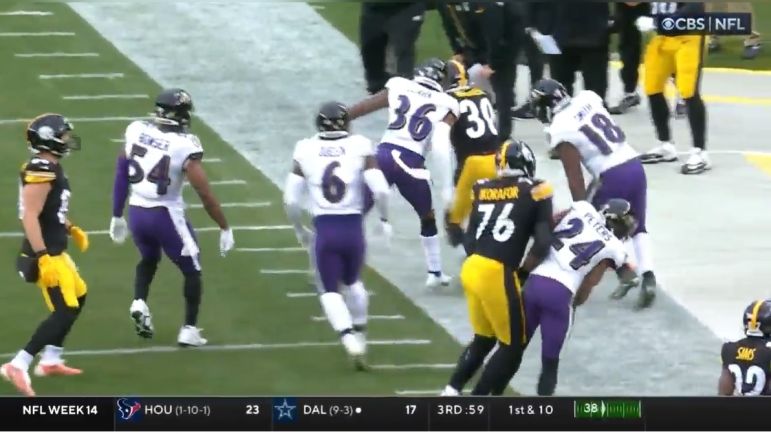 Pittsburgh Steelers’ OT Chukwuma Okorafor was fined $10,609 for unnecessary roughness in Week 14’s loss to the Baltimore Ravens. That news comes via NFL Network’s Ian Rapoport, who tweeted Okorafor and Ravens’ CB Marcus Peters was fined the same amount for his role in the dustup.

Here’s a look at the play, occurring along the sideline. It came at the end of this Jaylen Warren run right side with Okorafor coming in from behind the play. He took the first shot while Peters retaliated. Peters was the only one to draw a flag, typical of how these things are policed, but Okorafor couldn’t escape the fine.

Okorafor has served as the Steelers’ starting right tackle all of 2022, fresh off a new contract this past offseason. He’s played reasonably well though didn’t have his best game against the Ravens and perhaps vented some frustration in that moment.

Under contract for next season, Okorafor figures to remain the Steelers’ starting right tackle while the team explores potential upgrades on the other side of the line, left guard and left tackle.

All NFL fines are predetermined by the CBA. They increase a designated percentage each year, leading to quirky and uneven numbers like Okorafor’s mark. All fines are collected by the NFL and given to charity.