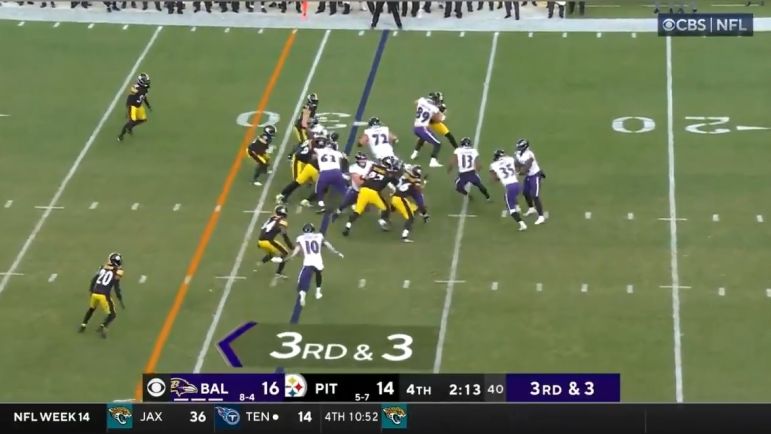 If the last six quarters of football have shown anything for the Pittsburgh Steelers’ defense, the run defense remains a serious problem for the black and gold despite their standing inside the top 10 in the league against the run.

In matchups against the Atlanta Falcons and Baltimore Ravens, the Steelers have allowed 333 rushing yards in the last six quarters of action, including 217 yards and a touchdown on Sunday at Acrisure Stadium against the Ravens in a 16-14 loss.

Sunday’s matchup saw the Ravens run the ball at will down the stretch in the second half, bullying the Steelers at the point of attack to put the game away.

For head coach Mike Tomlin, those struggles against the run aren’t overly concerning, considering the style of offense the two played, as well as the quarterback mobility the Falcons and Ravens brought to the table with Marcus Mariota and Tyler Huntley.

Still, it’s a concern nonetheless for Tomlin and the Steelers, especially entering the Week 15 matchup against the Carolina Panthers on the road.

Speaking with reporters Tuesday during his weekly press conference, Tomlin stated that though he’s not desensitive to the struggles from the run defense’s standpoint, the issues have the attention of the team ahead of the matchup with the Panthers, who are 13th in the NFL in rushing yards per game at 124.9 on the season.

“We played two run-centric teams with quarterback mobility. And so, you play two teams like that, you’re going have somebody ringing up yards on you in the running game,” Tomlin stated to reporters Tuesday, according to video via the Steelers’ official YouTube page. “If we played two teams that featured the passing game, you could be talking about six quarters of passing yards. And so, I’m not desensitive to it, but I just understand it’s just the nature of the style of ball we’ve been playing of late and we got another game that could be very similar this week. And so it does have our attention.”

It should have the Steelers attention, especially after the way the Ravens bullied them down the stretch Sunday. Guys couldn’t get off blocks, weren’t physical at the point of attack and really had no answer for the Baltimore rushing attack, which was a carryover from the second half against the Falcons game, though Pittsburgh was fortunate to escape that one with a win.

Now, without defensive lineman Chris Wormley due to a knee injury, the Steelers’ run defense takes a significant blow in the trenches.

After being bullied in the run game against the Ravens, the Steelers need to have a big response in Week 15 against the Panthers in that area. Though the Steelers understand the way the Falcons and Ravens play offensively, there’s still no excuse. It has the Steelers attention this week heading into the matchup with the Panthers. There will be an emphasis on stopping the run once again this week.