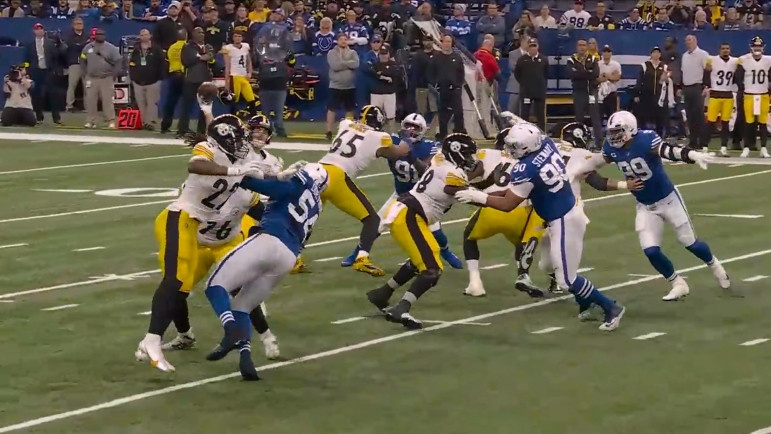 Even if it might not look like the Pro Bowl roster, the Pittsburgh Steelers do have talent and pedigree on offense at the skill positions. They also have a first-round pick playing quarterback. The underlying question throughout the year has always been about the offensive line, however, and how far they would allow the offense to go.

So far it’s been hit and miss, but generally trending in the right direction. The right side of the offensive line has been the strongest portion and the most consistent, with Chukwuma Okorafor at tackle and James Daniels at guard. Center Mason Cole has been effective when healthy, and Dan Moore Jr. has settled down some at left tackle.

And the fact of the matter is that we are seeing a better offense. The men up front do have something to do with that, especially when looking back and comparing it to how the Steelers started off the year, even going back to the preseason.

“I think we go back to the beginning of the season when things weren’t quite what we wanted. We were all saying it does take time to do that,” offensive coordinator Matt Canada said of the offensive line on Thursday, via transcript. “Everybody wants that time to be over however many weeks ago we started.”

But it doesn’t work that way, of course. Such growth takes time. the Steelers had two new free agents in the starting lineup, plus two second-year starters and a third-year starter of limited experience. And they had yet another new offensive line coach, this time one who has done things rather differently than they were used to. It’s been a process, but it’s showing improvement.

“I think those guys know where each other is going to be, how they’re going to come off of combinations,” Canada said. “If you can’t block them, it doesn’t matter what else you can do. It doesn’t matter. You’ve got to be able to block them. I think our guys have done a really good job of working at it and fighting and clawing and getting better. We’re seeing some of that. Again, we’re not finished, but those guys are doing a good job.”

Just getting those live reps in together and learning what the guy to your left and to your right is going to do is a big part of good offensive line play. When everybody is learning new techniques and concepts, thinking while playing, that makes it harder to be in sync with one another.

Things have settled down over the past couple of months. I don’t know where the ceiling is, but hopefully it’s still a ways to go yet. This offensive line is not a finished product by any means—and that includes concerning personnel once we get to the offseason—but there is reason to be pleased with the growth we have seen, in comparison to where we were.