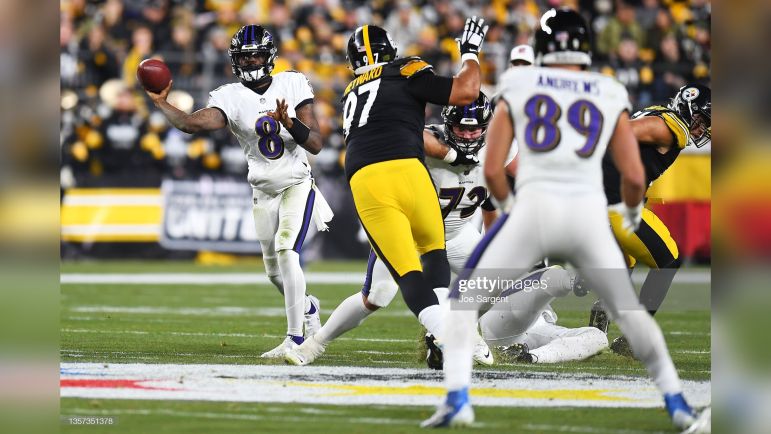 For the last 11 seasons, Pittsburgh Steelers star defensive lineman and team captain Cameron Heyward knows all too well how good the Baltimore Ravens are seemingly each and every season, regardless of who is in or out of the lineup.

Though some of the big names are no longer around, like Ben Roethlisberger, Terrell Suggs, James Harrison, Ed Reed, Ray Lewis, James Farrior, and more, it’s still Ravens-Steelers and always will be. Heyward knows that. Speaking with reporters Thursday during his weekly media session, Heyward stated that it won’t be an easy matchup Sunday regardless of who is in or out of the lineup.

“That’s what Mike T’s relaying that message. It’s not an easy matchup,” Heyward stated to reporters Thursday, according to Steelers.com. “They have good guys over there that have done it for a long time and are successful. Justin Tucker as a kicker, Calais Campbell,  Lamar Jackson, they got some real good players over there.

“And you have to make sure that, not only you match energy, but this rivalry is about who’s gonna be the physical team.”

Even though there have been some blowout wins on both sides in the rivalry matchup, as Heyward stated it’s never an easy one for either team. Both teams come out of this one rather banged up consistently due to the physicality of the matchup and what’s at stake each and every matchup.

Happy Ravens Week Throwback: That time in 2014 when Ben Roethlisberger threw six touchdowns against the Ravens. He was 25 of 37 for 340 yards and 6 TDs for a rating of 136.3. The Steelers beat the Ravens 43-23. @_BigBen7 #Steelers #NFL #HereWeGo pic.twitter.com/qAQVcX5iYh

That will be the case again in Week 14 as the Steelers continue to try and climb out of an early-season hole, while the Ravens look to maintain pace with the Cincinnati Bengals in the AFC North race without Lamar Jackson, who is expected to miss the Week 14 matchup.

Matching energy, being the more physical team and taking care of the football will be key once again — which is seemingly the case every season — for the Steelers in Sunday’s matchup. It might be that old-school, knockdown drag-out style of game that fans have gotten sued to in the last two decades when it comes to Steelers-Ravens.

It won’t be easy for either side.