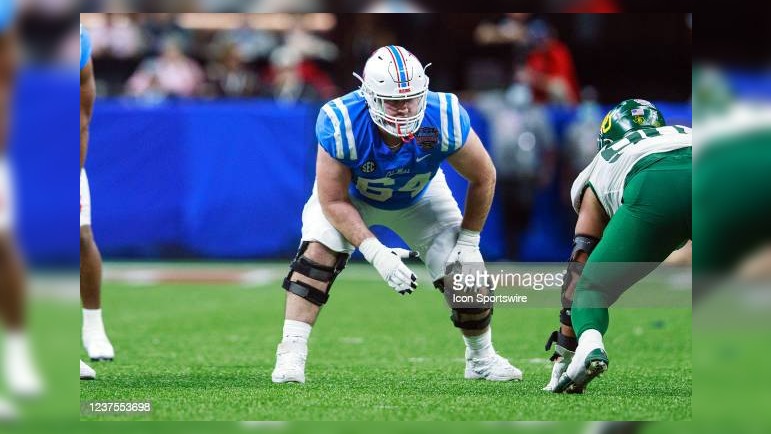 Throughout the 2022-2023 college football bowl season, we’ll be highlighting each game and the key 2022 NFL Draft prospects Pittsburgh Steelers’ fans should keep an eye on.

The UCF Knights and the Duke Blue Devils travel up to Annapolis, Maryland to face one another in the Military Bowl.

The Blue Devils have an interesting prospect in DL #90 DeWayne Carter. Carter stands 6’3″, 298lb, and has been productive in his last two seasons in Durham, racking up 10 sacks, five forced fumbles, three fumble recoveries, and five PBUs during that span. Carter has a knack for getting the football out, being mindful of going for the strip when the opportunity presents itself. He profiles best as a 4-3 DT or a 3-4 DE that can take on blocks against the run while having some pass-rush juice. His stout frame and strength make him difficult to block, running through guards and centers in his pursuit of the QB.

On the offensive side of the ball, look out for OT #62 Graham Barton who is only a junior, but has the measurables (6’5″, 311lb) as well as the tape to warrant being a Day 3 prospect should he decide to declare or stay in school for another season.

The Knights have a prospect that I got to know well in Gainesville before transferring this past Spring in TE #8 Kemore Gamble. Gamble started his college career with the Gators and played more as a reserve his first two seasons before having a strong 2021 season, posting 31 receptions for 414 yards and four scores. He transferred to UCF after the coaching change at Florida and only has caught seven passes for 118 yards and a TD this season. He lacks ideal size and length (6’4″, 245lb) and is more of a slot/H Back TE than a traditional in-line player, likely making him a UDFA unless he tests well in the pre-draft process.

RB #5 Isaiah Bowser is another name to watch for the Knights as the 6’1″, 225lb runner has good size and the frame to shoulder a heavy workload. Bowser is a strong runner in-between the tackles with good contact balance and a decent burst. An average pass catcher, Bowser will have to make a team as a short yardage/goal line back and provide special teams value as he looks to prove he can add more as a pass catcher this Spring in front of scouts.

This double-cut by @UCF_Football RB Isaiah Bowser got a wide-eyed reaction among NFL scouts in the pressbox last Thursday. @seniorbowl is looking forward to tracking @zaybowser rest of the season.#TheDraftStartsInMOBILE™️ https://t.co/368DadXBx4 pic.twitter.com/eIX4pdluj5

Arkansas and Kansas head to Memphis, Tennessee to battle it out in the Liberty Bowl.

Arkansas already has had several of their top prospects opt out of the game, but OG #55 Beaux Limmer is expected to still play in this game. Limmer is inside versatile, having the ability to play guard and center if needed. Possessing a solid frame (6’5″, 302lb) and good tape as a run blocker, Limmer could entice teams to select him on Day 3 of the draft. While being decent in pass protection as well, Limmer still could decide to go back to continue to refine his technique and help his draft stock for next year.

Another junior that could decide to go back for the Hogs is CB #3 Dwight McGlothern. McGlothern has the size and length you desire in a boundary corner, standing 6’2″, 181lb with long arms and legs to cover ground quickly and contest passes. He had nine PBUs and three INTs this season, doing a good job in contested catch situations while also showing physicality as a tackler, picking up two forced fumbles. Still, McGlothern’s awareness and coverage skills can improve when matched up with nuanced route runners, prompting a potential return back to college.

Kansas has their own defensive back drawing NFL interest in S #1 Kenny Logan Jr. Logan has the frame (6’0″, 210lb) as well as the athleticism and production that project well to the league as a player with stopping power as a hitter as well as the burst and recovery speed to contest passes when in the air. He’s been a tackling machine the last two seasons with the Jayhawks with over 200 total stops during that timeframe including two forced fumbles, two fumble recoveries, three INTs, and five PBUs. Logan profiles as a strong safety that can play near the LOS or split zone in the middle of the field, likely getting drafted somewhere on Day 3.

By far the most underrated play from Saturday. Incredible effort from Kenny Logan to somehow knock it loose from one of the best receivers in the country…I don’t know if KU wins this game if this ends up being a TD pic.twitter.com/5Y0ZqmPsm0

The Tar Heels travel to the West Coast as the Ducks head down south to sunny San Diego on Wednesday night to face off in the Holiday Bowl at Petco Park.

While a few of the Ducks’ prospects on the defensive side of the ball have already opted out, it appears that DL #3 Brandon Dorlus will play in this game. Dorlus is an interesting prospect, standing 6’3″, 290lb with a compact frame for a defender that plays inside as a 3-tech/4i as well as an outside pass rusher. He lacks high-end athletic traits but has shown pass-rush prowess on tape, logging five sacks in the last two years combined. Still, Dorlus will likely be seen as a tweener by many and needs to continue to refine his pass rush to become more productive and make an impact at the next level as a likely mid-to-late round selection.

Brandon Dorlus gives you inside and outside versatility as a rusher. Whether softening edges to run the arc or slanting to inside gaps for interior pressure.

OL #56 T.J. Bass and #78 Alex Forsyth also are draftable offensive linemen to watch that may get selected later on Day Three as backup options that could develop into spot starters.

For the Tar Heels, LB #33 Cedric Gray is a name to watch. Gray stands at 6’2″, 230lb, and has padded the stat sheet the last two seasons, posting 136 total tackles (76 solo) a sack, three forced fumbles, two fumble recoveries two INTs, and five PBUs in 2022 alone. His pursuit of the football as a run defender sticks out as well as his instincts in coverage. Still, Gray needs to improve getting off blocks and running in-stride with backs and TEs in man coverage. He could return to school or opt to declare early depending on his draft projection.

Wednesday’s bowl game action concludes at NRG Stadium in Houston as the Red Raiders and Rebels play in the Texas Bowl.

The Red Raiders have several prospects opting out or returning to school, but RB #4 SaRodorick Thompson is a draft prospect to watch. Thompson is a big, physical runner at 6’0″, 220lb while having fresh legs after operating in a committee backfield at Texas Tech the last five years. He’s never topped 800 rushing yards in a given season, but Thompson has maximized his touches, having two seasons with double-digit TDs and nearly 90 receptions in his college career. A late-round pick or UDFA, Thompson could benefit greatly from a strong performance.

Ole Miss has several draft prospects playing in the bowl game including RB #6 Zach Evans. Evans transferred from TCU to Ole Miss and played in a committee with Quinshon Judkins. Still, Evans maximized his touches, turning 136 carries into 899 yards (6.6 YPC) and eight TDs along with eight receptions for 93 yards and another score. Evans has good size (6’0″, 215lb) as well as an athletic profile that projects well to the league as a mid-round RB that can start in a committee role but can earn more work as he proves himself.

Zach Evans says he still has something to prove and plans to play in the Texas Bowl while continuing to consider whether to enter the NFL Draft.

Wouldn’t want to be the guy that had to get in his way. pic.twitter.com/v0iejMEtFG

Ole Miss also has OG #64 Nick Broeker who projects to be a starting-caliber guard at the next level given his experience and level of play in the SEC. He has good size and is a strong run blocker while also being a capable pass protector. Broeker should his name be called somewhere on Day 2 or Early Day 3 of the draft as a player that’s inside/outside capable. WR #1 Jonathan Mingo should be drafted in the middle rounds of the draft as a big, physical pass catcher (6’2″, 225lb) that generates plenty of YAC while also being a contested catch receiver. LB #8 Troy Brown and S #1 Isheem Young are potential late-round draft picks with Young potentially returning to school.

Nick Broeker…full sprint slab to finish. You have to love it. pic.twitter.com/rpNqc5rEjD