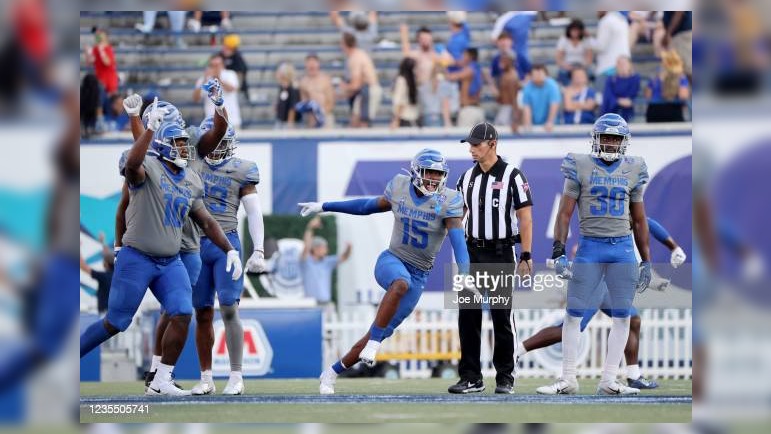 Throughout the 2022-2023 college football bowl season, we’ll be highlighting each game and the key 2022 NFL Draft prospects Pittsburgh Steelers fans should be keeping an eye on.

The Buffalo Bulls travels to Montgomery, Alabama to take on the Georgia Southern Eagles to kick off the action for Tuesday’s bowl games.

The Bulls are led on defense by LB #8 James Patterson who is looking to transition to the pros after the season. The 6’0″, 232lb redshirt senior has average athleticism and a smaller frame for NFL standards, but has plenty of experience, being a starter since his true freshman season. The younger brother of former Buffalo RB Jarret Patterson, James has padded the stat sheet for the Bulls during his college career, posting 406 total tackles, 38.5 tackles for loss, and eight sacks in his career. Patterson makes an impact as a run defender while picking off one pass every season the last four years. His athletic limitations may relegate him to a backup/rotational role, but Patterson has a shot of getting drafted on Day 3.

This TFL gives Buffalo LB James Patterson 400 tackles for his career, making him the 5th player in program history to reach 400 tackles! pic.twitter.com/FL1BLkncnz

The Eagles have RB #25 Jalen White as a name to watch as a potential late-round/UDFA prospect. White is only a junior, but the 6’0″, 215lb junior has the size and athletic profile you look for at the position. He has 914 yards rushing on 162 carries this season along with 22 receptions for 217 yards and 11 total TDs, possibly prompting him to leave early for the pros.

Memphis and Utah State meet in Dallas, Texas to square off in the First Responder Bowl on Tuesday afternoon.

Memphis has S #15 Quindell Johnson on the defensive side of the football as a player to watch. The 6’1″, 195lb senior has been a productive player for the Tigers, posting 316 total tackles, 10 interceptions and 24 passes defended in his career. He has four picks and two forced fumbles in 2022, showing a knack for making the splash play on defense in coverage or as a tackler. He relies on his instincts to take him to the ball in off-coverage and plays with good pursuit against the run. While not the best man coverage defender, Johnson brings some good qualities to the table as well as being a special teams contributor to the team that selects him, adding depth to their safety core.

Memphis Quindell Johnson just makes plays. He tackles well and is a solid defender. Good burst of speed when closing to attack the ball at the catch point. Good player! pic.twitter.com/yhPD6Xnz3J

TE #86 Caden Prieskorn is another player from Memphis with a chance to get drafted. He had a breakout season in 2022, posting 593 yards and six TDs. Still, it’s likely Prieskorn goes back to school to boost his draft stock.

The Aggies have their own safety that hopes to get drafted this spring is S #27 Hunter Reynolds. The 6’0″, 200lb senior has been productive for Utah State the last two seasons and finished his senior season strong, posting 88 total tackles, three interceptions, and seven passes defended. Reynolds likely will have to cut his teeth on special teams to start his NFL career as he works his way into the lineup as a depth defender.

Coastal Carolina and East Carolina both leave the state and head west to Alabama to battle one another in the Birmingham Bowl.

The Chanticleers have a talented DB in CB #2 D’Jordan Strong. The 5’11″, 190lb corner set the tone early in 2020, picking off five passes including one being taken back to the house. However, Strong only has one pick in the last two years combined, causing his draft stock to fall a little since that stellar season two years ago. Still, Strong is a willing tackler and goes after the ball in the air like it’s his, having six picks and 15 PBUs the last three seasons. He lacks ideal measurables and his athletic testing may be suspect, but Strong has traits you want in an NFL cover corner and will get looks on Day 3 of the draft.

The Pirates have two potential draftable players in QB #12 Holton Alhers and WR #11 Isaiah Winstead. Ahlers has the size and experience you like in a college QB prospect, likely being a camp arm that can compete for a QB3 spot on a roster. Winstead transferred from Toledo and had a strong 2022 season for East Carolina, posting 82 receptions for 1,013 yards and four TDs. He has great size (6’4″, 213lb) and the ability to win down the field in contested coverage, making him an intriguing late-round dart throw.

To cap off the Tuesday slate of bowl games, the Badgers and the Pokes square off in Phoenix in the Guaranteed Rate Bowl.

Both teams have a ton of players opting out or entering the transfer portal in this matchup, but the Cowboys do have S #25 Jason Taylor II scheduled to play in this game. Taylor is a big, productive safety for the Pokes, standing 6’0″, 215lb, and had a stellar season with 87 total stops, a fumble recovery, seven PBUs, and six INTs. He’s a physical tackler that will come downhill and fill the alley against the run while being opportunistic in coverage, jumping underneath routes, or making INTs in man coverage situations. He’s projected to be a late Day 3 pick, but a strong pre-draft process with his production could vault him into Day Two consideration.

He finished this past season with 87 tackles, two TFL, 6 INTs and 7 PDs. pic.twitter.com/1wGhcxQuLH

EDGE #9 Brock Martin is another Cowboys defender who has a shot of getting drafted late, having had a better 2021 season than 2022 campaign. OT #76 Caleb Etienne is technically just a junior, so he may go back to school. However, the 6’7″, 325lb blocker has the measurables scouts drool over and has garnered some interest from teams, potentially prompting him to declare should he have a good performance.

The Badgers have a defender playing in this game that will garner some draft consideration in S #15 John Torchio. Torchio was a backup his first two seasons in Madison but has become a starter the last two years and has posted some strong production in that span, posting 93 total tackles, nine interceptions and six PBUs in his career with five interceptions and five passes defended this season alone, taking two to the house.

He does a good job undercutting routes by reading the QB’s eyes in coverage, showing good range and pursuit to the football in the air as well as a run-and-chase defender. His lack of twitch and short-area quickness may knock his draft stock, but Torchio has the makeup of a core special teamer as well as a potential value at DB.