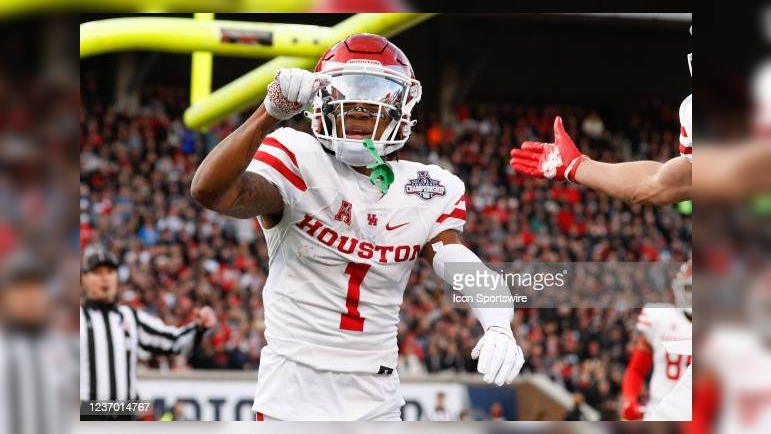 The Houston Cougars travel to Shreveport, Louisiana to face off against the home state Rajin’ Cajuns of Lafayette.

The Cougars are headlined by WR/KR/PR #1 Nathaniel “Tank” Dell. Dell has been accumulating stats for the Cougars the last two seasons, topping 1,300 yards last season, and has followed that up with 103 receptions for 1,354 yards and 15 scores in 2022. Dell is electric with the ball in his hands, having the elusiveness to make defenders miss in open space as well as the speed and acceleration to generate plenty of YAC after the catch. Dell is undersized by NFL standards (5’10″, 165lb), which will likely affect his draft stock, but for a team needing more explosive plays in the passing game and a player that can create with the ball in their hands, Dell brings that skill set to the table.

Houston WR Tank Dell, one of the nation’s most explosive playmakers, very rare change of direction and twitch. Would love to see this dude blue handling the slot and punt returns. I think hits of offense very well. pic.twitter.com/YyykaGqzzU

Also suiting up for the Cougars is S #2 Gervarrius Owens. Owens started his career at Kansas State but worked his way to seeing playing time with the Cougars after the transfer. He has good size and length (6’0″, 200lb) to be a factor against the run, showing willingness as a tackler. He also is a factor as a pass coverage defender, working his way over in coverage to impact passes down the field. A likely Day 3 selection, Owens brings experience and the skill set to factor in as a backup/rotational defender in the secondary as well as a special teamer to start his NFL career.

A long, 6’0”, 200 pounds firebrand who flies to the football, Owens has coverage skills and the ability to effortlessly penetrate the backfield 🔥pic.twitter.com/kkujm0CqM5

QB #3 Clayton Tune also has a shot to get drafted in the late rounds of the 2023 NFL Draft as a potential backup QB. Tune put up some impressive numbers the last two seasons at Houston, throwing for 7,391 yards and 67 TDs during that span with 20 INTs. Tune also is a threat on the ground with his legs, rushing for nearly 500 yards and five TDs in 2022 alone. Tune has the size you look for at the QB positions (6’3″, 220lb) and has the arm talent to make most NFL throws. Look for Tune to cap off his college career on a high note in this one and try to boost his stock as a current sleeper heading into draft season.

If Zach Wilson did this ESPN would’ve cancelled the rest of the game and Twitter would’ve announced him the #1 pick of the NFL draft.

Louisiana will likely call on CB #0 Kam Pedescleaux to cover the likes of Dell and the other Houston receivers in this game. Pedescleaux is also undersized, standing just 5’8″, 196lb. However, he plays much larger than that as a physical defender that comes downhill against the run as well as when he plays chase of the ball. He has racked up 189 total tackles, 17 tackles for loss, three interceptions and 16 passes defended in his career and will have to make the decision to go back to school with another year of eligibility or enter the draft as a late-round hopeful.

Also watch out for WR #8 Michael Jefferson who has 51 receptions for 810 yards and seven touchdowns this season, the best of his college career. The senior may likely be a UDFA, but he has good size and length (6’4″, 205lb) that may have teams consider taking a flier on him.

The Demon Deacons and the Tigers are set to duke it out in Tampa, Florida Friday night in the Gasparilla Bowl.

The player you should watch closely for Wake Forest is WR #9 A.T. Perry. Perry decided to come back after a stellar 2021 campaign where he posted 71 receptions for 1,293 yards and 15 TDs, backing that up with 70 receptions for 980 yards and 11 scores this season. Standing at 6’5″, 205lb, Perry has the size and wingspan to make contested catches in coverage, stretching the field while providing a viable red zone threat. Perry will need to prove his timed speed as well as his ability to develop more as a route runner during the pre-draft process, but figures to be a mid-round selection.

Perry’s QB #10 Sam Hartman also will be draft-eligible this spring. Hartman lacks ideal size (6’1″, 210lb), but has put up prolific numbers for Wake Forest the last two seasons, topping 7,500 passing yards with 74 TDs and 25 INTs during that timeframe. While not the most dynamic athlete, Hartman has also shown he is a capable runner, rushing for 114 yards and a score this season, but ran for 11 TDs back in 2021. Many will say Hartman is that scheme-dependent QB given his measurables and lack of dynamic arm talent, but he should become a great backup at worst, with a chance to work his way into a starting role if paired with the right offensive system.

Sam Hartman! Wake Forest! The DEACS are up on Clemson. pic.twitter.com/2SkJaTCdpj

On the defensive side for the Demon Deacons, look out of DL #0 Kobie Turner. Turner is a fifth-year senior who transferred from Richmond and posted 34 tackles, a sack, two forced fumbles, one fumble recovery, and a PBU this season. He has good size as a 3-tech/4i (6’3″, 290lb) and can be a disruptive player near the LOS as a Day 3 prospect.

For Missouri, turn your eyes toward OT #76 Javon Foster. The 6’5″, 319lb redshirt senior has been a mainstay on the left side of the OL the last two seasons, having the measurables and the baseline athleticism you want in a blindside protector. A capable pass protector that can mirror well against pass rushers, Foster could be selected somewhere on Day 2 or Day 3 depending on how teams think he can fit their scheme and develop.

On defense for the Tigers, watch DL #9 Isaiah McGuire. The 6’4″, 275lb senior had a great season for Missouri, posting seven sacks and two forced fumbles. With 13 sacks in the last two years, McGuire has shown a steady progression as a pass rusher, using his size and length to defeat blockers as well as his relentless pursuit to chase the run or hunt down QBs in the pocket. More of a base 4-3 DE, McGuire should be drafted somewhere on Day 3 as a player that can come in and provide rotational snaps on the edge as he develops his overall game.

Isaiah McGuire has put together one heck of a season for #Mizzou. pic.twitter.com/pKoApoQYWm