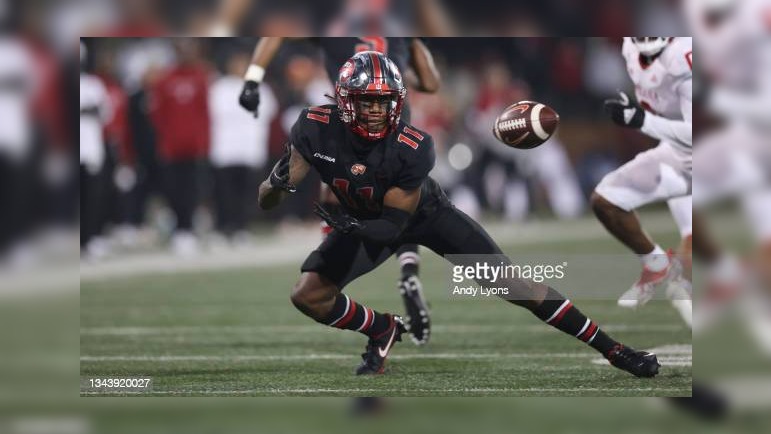 The South Alabama Jaguars make the short trip to New Orleans to battle the Western Kentucky Hilltoppers to be named champs of the New Orleans Bowl. The Jags have a defensive back you should watch in CB #18 Darrell Luter Jr. who has the size and length (6’0″, 190lb) you want to see in an NFL cover corner. Luter’s ball production was mediocre this season (one INT, five PBUs), but he’s a year removed from snagging four picks and batting away nine others. He will likely be either a late-round pick or UDFA that will cut his teeth on special teams and maximize his reps on defense to secure a roster spot.

I came away impressed with South Alabama CB Darrell Luter Jr. He is a competitor, patient, and closes quickly on the ball. A name to definitely track for 2023 season! (@Luter01_ ) pic.twitter.com/z7hGUvSLuL

On offense for South Alabama, turn your eyes to WR #0 Jalen Wayne. The 6’2″, 207lb senior was a good compliment to current Cowboys WR Jalen Tolbert last season and became more of the focal point in the passing game, catching 56 passes for 795 yards and nine TDs. Wayne excels as stretching the field and winning jump ball situations as more of a Z-type WR.

For Western Kentucky, they have its own receiving threat with professional aspirations in WR #11 Malachi Corley. Corley is a thickly built receiver (5’11″, 210lb) that makes plays in space thanks to his short-area quickness and burst after the catch. He is just as willing to run through you as he is to make you miss in the open field, generating YAC consistently each time he touches the football. He saw his production take a huge leap this season, (90 receptions for 1,179 yards and nine TDs, 10 carries for 84 yards), prompting him to consider leaving early for the league.

Malachi Corley is dominant in the open field 🤯 pic.twitter.com/tUV9jQs6iY