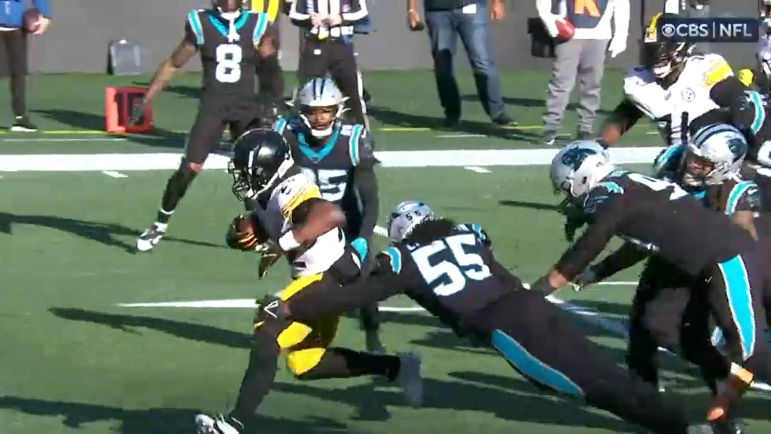 At the beginning of the season, the Pittsburgh Steelers weren’t close to the team we hoped they would be to open 2022. They started the season 2-6 prior to the bye week and the defense once again was getting gashed on the ground like they did the majority of the 2021 season. The offense wasn’t much help either as the passing game surpassed 250 yards just one time in the first eight games while the team still currently has more INTs that passing TDs on the year.

The expectation was that the running game would be the focal point of the offense regardless of if it was Mitch Trubisky or Kenny Pickett under center. It made sense since RB Najee Harris finished the 2021 season top five in rushing yards (1,200) while being the workhorse back the Steelers were looking for when they drafted him in the first round.

However, the running game struggled to get going in the first half of the year as Harris dealt with a foot injury and his on inefficiencies on the field as well as having to adjust to having two new starters on the offensive line. Many were calling for Najee Harris to be a bust, looking inferior to rookie UDFA Jaylen Warren on several occasions during that time. However, the running game rebounded in a big way after the bye week as well as Harris who is now 157 yards away from cracking 1,000 yards on the ground after looking like he wouldn’t surpass 750 yards at the halfway mark.

Najee Harris on the Steelers run offense in the second half of the season pic.twitter.com/M8nYUZPa02

Since the bye week, the Steelers have rushed for under 100 yards as a team just once, having four games over 150 yards on the ground during that time frame. The offensive line is doing a better job opening holes for the backs as Harris and the rest of the backfield has shown improvement in their respective play with Warren providing more explosive plays as a runner and receiver and Benny Snell Jr. stepping in against the Indianapolis Colts to carry the load with Harris and Warren on the shelf, closing out the contest with possibly the best game of his career.

Carolina's DT beats Mason Cole cleanly with a swim move off the snap.

James Daniels was coming on the double team, but he doesn't need any of Cole's help, successfully clearing the hole himself for Najee Harris to pick up 4.

“Like I said, we’re doing the right things,” Harris continued. “We made the right adjustments from the bye, and we’re heading the right way.”

The Steelers’ recipe for winning games in 2022 was simple: run the ball, play good defense, and don’t turn the football over. Since the Week 9 bye, the Steelers are 5-2 thanks to improved play by their defense, QB Kenny Pickett doing a better job taking care of the football, and the running game stepping up to be the offense’s focal point. The Ravens present a daunting task in terms of a stout rush defense, meaning the running game must step up again in a big way for Pittsburgh to keep their slim postseason playoff hopes alive on Sunday night.