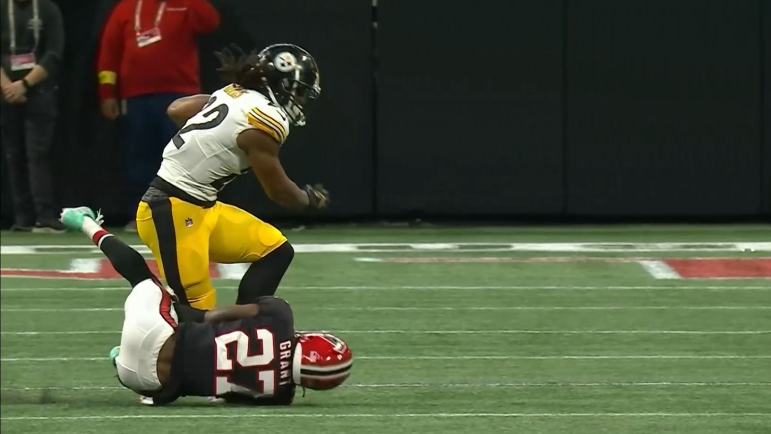 Najee Harris dribbled a dude Sunday afternoon. And it’s earned him the NFL’s best “angry run” of the week. NFL Network’s Kyle Brandt has issued his weekly “angry run” for the most powerful and brutal run of the week for years now, a cool history and award that’s been won by top backs in football like Derrick Henry, quarterbacks, heck, even a defensive lineman once won it.

But no one wins the award as often as Najee Harris. He took home his 4th “scepter,” the hardware given out to the winner, of his young NFL career. If you want to play Angry Runs analytics, and we do, it’s the best win rate for any player in football. Week 13’s was well-earned for his brutal stiff arm of Falcons’ strong safety Richie Grant, bouncing him off the Atlanta turf like a basketball.

If you hadn’t seen it enough from Brandt, here’s another look at just the stiff arm in all its glory. And that’s no small man he threw down. Grant was considered one of the league’s hardest hitters coming out of the draft and he’s been known to light running backs up. Here, Harris turned the tide.

Harris’ stiff arm is a powerful weapon and earned him angry run awards before like the time he threw Raiders’ safety Johnathan Abram out of the club. Harris and the Steelers’ run game is rounding into form since the bye. They’ve now rushed for 100+ yards in five straight games while Harris’ numbers look far better than before the off-week. In fact, comparing and contrasting, his yards per carry is more than a full yard higher over the last month and he’s tripled his number of rushing scores.

Najee Harris before the bye:

Najee Harris since the bye:

A clear difference there from one of the least efficient running backs to a top-ten level performance. Health has been a key factor. Past a foot injury that bothered him all summer and to start the year, Harris is running downhill with more power and physicality, playing to his size.

Pittsburgh’s kept him fresher, no longer making him a true workhorse back. He played just 66% of the snaps in Sunday’s win over Atlanta, one of his lowest marks of the season excluding blowouts and games he was injured in. He also played just 60% of the snaps versus New Orleans but had one of his most efficient days of the season, averaging nearly five yards per carry.

Harris and Pittsburgh will need to keep things rolling against Baltimore. But like it’s been since the days of Ray Lewis and the late Tony Siragusa, the Ravens are a tough bunch to run on. They’re allowing just 3.8 YPC, tied second-best in football, and haven’t allowed a team to run for 100+ yards since Week 7. To extend the Steelers’ win streak from two to three, they’ll have to find a way to control this game on the ground.