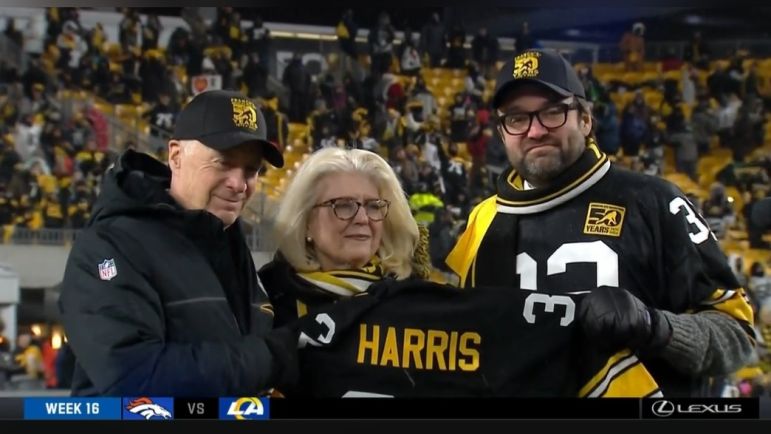 The Pittsburgh Steelers beat the Las Vegas Raiders 13-10 on Christmas Eve, 50 years and one day after they beat the Raiders 13-7 in the 1972 AFC Divisional playoffs, which featured Franco Harris’ Immaculate Reception. Saturday night, a night that was going to honor Harris’ catch and where the team retired his number, became a night to remember Harris’ life and honor his legacy after he unexpectedly passed away earlier this week. Second-year Steelers running back Najee Harris said the win on Saturday night wasn’t only a good win for the Steelers organization, but a good win to honor Franco Harris.

Harris also said the Steelers were going to give the game ball to Harris’ wife, Dana.

“Coach T said that we’re going to give the game ball to his wife, so I think it’s a good way for the night to end.”

Najee Harris, who had a close relationship with Franco, and who Franco said he was impressed by, played one of his best games of the year tonight, running for 53 yards on 16 carries while also grabbing six receptions for 42 yards. He got better as the game went on, and with the weather affecting Pittsburgh’s passing game, he helped the team move the sticks and came up with a big 19-yard catch-and-run on what ended up being the Steelers’ game-winning drive.

During Franco Harris’ jersey retirement ceremony, he was represented by his wife and son Dok. It’s only fitting that the night meant to honor Franco ends with his family getting the game ball, and it’s no surprise that Mike Tomlin helped make it happen. It was a game the Steelers had to win, not only to stay alive in the playoff race, but to help celebrate the life of Harris, the man who helped mold the Steelers organization into one of the winningest franchises in NFL history.

It’s a night that Franco probably would’ve loved, the Steelers relying on their defense and running back with an Acrisure Stadium crowd battling the elements to honor all he did for the team on a windy Pittsburgh Christmas Eve. The ball belongs with his family, and hopefully, it will serve as another small reminder of everything he did and had continued to do for the Steelers.