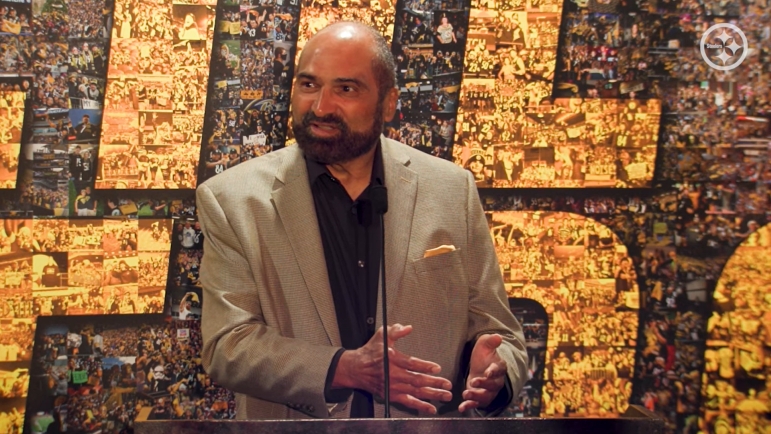 When RB Najee Harris spoke to the media Friday in the locker room, most of the conversation centered around the team’s upcoming game against the Carolina Panthers and who may start at QB with Kenny Pickett looking doubtful to play due to a concussion suffered last week against the Baltimore Ravens.

However, Najee Harris was asked about the team’s next matchup on the schedule against the Las Vegas Raiders in Pittsburgh on Christmas Eve which will also serve as the game where the team will celebrate the 50th Anniversary of the Immaculate Reception that former Steelers RB Franco Harris made against the Raiders back a half century ago.

Next week, we will celebrate the 50th Anniversary of the Immaculate Reception and #SteelersNation can take part in the excitement. #Immaculate50 https://t.co/Ug7zSFqJJv

When asked about Franco Harris specifically and what is has been like to get to know the Steelers all-time great and Hall of Famer, Harris said he thoroughly enjoy getting to know a fellow big back that used to rep the Black and Gold.

“Franco’s cool man, he’s hella cool,” Harris said to the media Friday on video from Steelers.com. “He left the Alumni Weekend to come to my thing. I was like, ‘Dang’, you feel me? Hella cool for that. Franco’s a good guy though. He texts me every night.”

Despite not playing for the Steelers since 1983, Franco Harris has been a constant face in Pittsburgh Steelers events up to present day. He often announces draft picks for the Steelers at the site of the NFL Draft and is a regular at the games and other events the team puts on for the alumni as well for acts of service.

It’s great to see a former player and all-time Steelers great like Franco Harris reach out to a youngster like Najee Harris and take him under his wing and show him support as a current player of the team as well as a humanitarian. It speaks volumes for Franco to skip out on an event like the Alumni Weekend Dinner to attend Najee’s event at Sullivan’s Steakhouse to help homeless children in the Pittsburgh area.

A huge thank you to @ohthatsNajee22 for celebrating the launch of Da Bigger Picture Foundation at Sullivan’s Steakhouse Pittsburgh! Which of the auction items would you have bid on? pic.twitter.com/uIudUZfjpq

Najee Harris has become a key face of the Pittsburgh Steelers ever since he was drafted in the first round back in 2021, becoming a team captain and the team’s feature back while also being a leader on the practice field, in the locker room, and off the field by being a first-class human being helping out disadvantaged youth. Franco Harris is showing his support of Najee in his efforts, being a person he can confide into on a daily basis via text messages as well as coming to support him at his events and at games.

The Pittsburgh Steelers are seen as one of the franchises in the league where it’s like a fraternity and all members of the organization, former and current, are family. That’s the way the Rooneys want it and the players has expressed their pleasure in that opportunity as well. This appears to be the case against with the bond that Franco and Najee have developed in just a short time with Franco introducing Najee to the brotherhood of what it means to be a part of Steeler Nation.