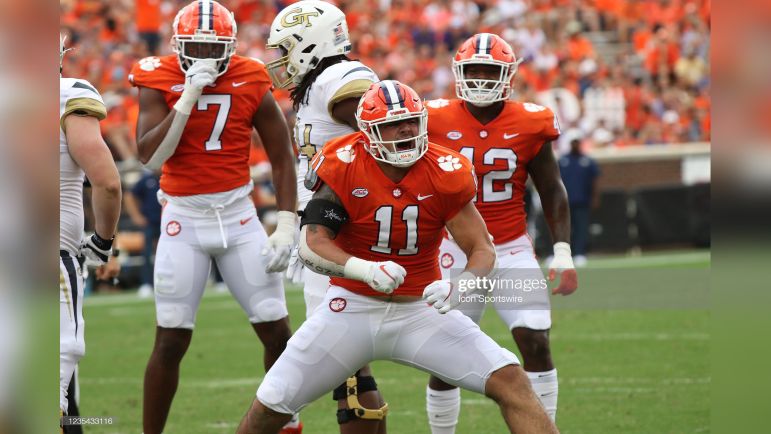 With the Pittsburgh Steelers currently sitting at 7-8 and with a slim chance of making the postseason, many have already set their sights on next year and specifically what the 2023 NFL Draft may have in store for a Steelers team that is projected to have their highest pick in decades, currently sitting at #16 overall. Things can change and Pittsburgh can pick up more wins to drop their current draft slot, but it’s never too early to go through mock draft scenarios and project player/prospect fits who the Steelers may be interested in given their current needs on the roster and the talent in this upcoming draft class.

Analysis: Pittsburgh faces tough decisions along the defensive front with Tyson Alualu, Larry Ogunjobi, and Chris Wormley all scheduled to hit free agency this offseason. Instead of bringing back multiple veterans on contract extensions, they could opt to inject more youth upfront with a player like Clemson’s Bryan Bresee.  Bresee is a young, raw defensive linemen that needs refinement in his technical development of the game as well as improve hand usage as a pass rusher, but the ceiling is immense.

His athletic ability at his size is impressive, having a motor to run down skill position players rather routinely if he’s got the angle. He can move all over the defensive front. He could be Pittsburgh’s answer at DE opposite Cam Heyward as he hopes to develop into an impact player at the next level.

Who should be taken highest?
pic.twitter.com/E0lsrOvlaC

Analysis: Pittsburgh could stand to add talent on the left side of the offensive line with both Dan Moore Jr. and Kevin Dotson providing shaky play at LT and LG, respectively. Tennessee OT Darnell Wright could be the guy they target early on Day Two of the draft, being capable of playing both spots. Wright may not be garnering the same attention as some of the other top tackles in this draft class, Wright and the offensive line is a big reason for this team’s success this season.

The 6’6, 335lb senior has fantastic size paired with the movement skills to be a strong run blocker, having the mobility to get out in space and climb to the second level to pick up linebackers and safeties. He has improved as a pass protector every season. Wright could come in and kick inside to guard and be dominant in the running game or battle Moore for the LT job, possibly relegate the two-year starter to the bench.

Love this rep from the right side of the @Vol_Football offensive line. Great finish from Darnell Wright! pic.twitter.com/zWis1jwvnN

Analysis: The Steelers desperately need to add EDGE depth behind T.J. Watt and Alex Highsmith to bolster the pass rush rotation and provide a reasonable replacement should either starter miss any time. Drew Sanders would be a great selection in the second round as a guy that experience playing both on the edge and in the box, giving Pittsburgh a moveable chess piece at LB like the hybrid players Brian Flores has coached in the past. Sanders had a productive season in 2022, posting 103 total tackles (40 solo), 9.5 sacks, three forced fumbles, a fumble recovery, five PBUs, and an INT. Sanders is a quality pass rusher, having the speed and explosiveness to win around the corner, making him a tantalizing prospect.

Analysis: The Steelers tried to go the cheap route and invest two-year deals with an average yearly value of $4 million into CBs Ahkello Witherspoon and Levi Wallace this offseason. While Wallace has played well at times, neither cover man should be considered a #1 CB. They address CB in the third round in this scenario, selecting Texas A&M CB Jaylon Jones. Jones has a lot of qualities you want in a prototypical cover corner, having great size and length (6’2, 205lb) as well las the athleticism to run with receivers on the outside.

He profiles as a boundary corner that only has three INTs in his career but does a good job breaking up passes with his long arms and size. An aggressive tackler in run support, Jones has the profile to matchup against #1 WRs on the outside, having a low completion percentage against him during his time with the Aggies. He can come in and compete for playing time outside as Pittsburgh hopes he can develop into a full-time starter.

Just finished writing up Texas A&M CB Jaylon Jones. Former five-star recruit, with great size (6-2, 205) and strength. Still only 20 years old. I like him at corner but have a feeling his best future might be at safety. A name to watch as the draft approaches pic.twitter.com/e5PjcAlw7R

Analysis: The Steelers desperately need to add talent and playmaking ability at slot WR with Steven Sims and Gunner Olszewski not cutting it after the team traded away Chase Claypool. While rookie WR Calvin Austin III should be cleared for next season, he has missed his entire rookie season with a foot injury and isn’t a sure bet to be the team’s starting slot receiver Day One in 2023, making it extremely likely that the team will again look to find a diamond in the rough and select another mid-round receiver prospect.

Rakim Jarrett fits the bill as an underrated middle round draft prospect whose measurables don’t really stick out (6’0, 190lb), but has the pedigree as a former five-star recruit as well as the athleticism and tape to warrant being a quality receiver at the next level. Jarrett is a good route runner that can be dangerous with the ball in his hands after the catch. He also has good body control, making impressive circus catches while having the mindset of doing the dirty work over the middle and in the running game as a blocker. Jarrett can come in as a slot receiver and move around the formation more as he gets acclimated to the NFL level, rounding out a WR core with Diontae Johnson, George Pickens, and Calvin Austin III.

Analysis: The Steelers continue to add to the trenches with this selection, picking OG Layden Robison for Texas A&M. Robinson was projected to be a top 50 pick this summer, but saw his draft stock take a tumble along with the rest of the Aggies during their poor 2022 season. Still, Robinson is a physically imposing human being, standing 6’4, 330lb with impressive strength and power in his hulking frame. He does a good job crating a push in the running game and has enough athleticism to get out in space and climb to the second level. Robinson needs to become a more consistent pass protector, but all the tools are there for him to develop into a quality IOL ant the NFL level.

Layden Robinson (no. 64) is a monster

Climbs to the LB and erases him opening up a massive runway for Spiller@PFF had him with a 21.4 impact run blocking % last year – that's a big time number, devours defenders pic.twitter.com/j7WdxWXnII

Analysis: The Steelers haven’t received the play they hoped for when signing LB Myles Jack this offseason and have Devin Bush becoming a free agent this offseason. To add depth to the position, they select LB Dorian Williams out of Tulane to close out the draft. The 6’2, 225lb senior has been a field general, making plays against the run, as a pass rusher, and in coverage. He posted 115 total stops (72 solo), 8.5 TFLs, five sacks, two INTs two forced fumbles and seven PBUs this season. Williams is an instinctive player and should be drafted in the middle rounds as a rotational player to start his career with the opportunity to work his way into a starting role.

Dorian Williams is there for the INT! 😤 pic.twitter.com/rBppsOTxws