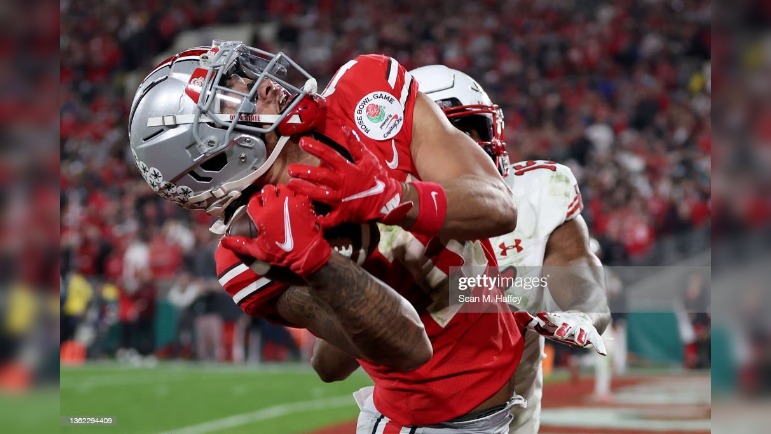 With the Pittsburgh Steelers currently sitting at 5-7, many have already set their sights on next year and specifically what the 2023 NFL Draft may have in store for a Steelers team that is projected to have their highest pick in decades, currently sitting at #14 overall. Things can change and Pittsburgh can pick up more wins to drop their current draft slot, but it’s never too early to go through mock draft scenarios and project player/prospect fits who the Steelers may be interested in given their current needs on the roster and the talent in this upcoming draft class.

Analysis: The Steelers desperately need a #1 CB as the likes of Levi Wallace, Ahkello Witherspoon, and James Pierre haven’t cut it when asked to guard opposing teams’ alpha WRs on the outside. Cam Smith has the physical profile to match what Pittsburgh looks for in a prototypical boundary corner, having the size (6’0, 188lb), length, and ball skills to make an impact in the secondary. Smith has six INTs over his last three seasons and is more than willing to aid in run support as a tackler. A redshirt junior, Smith could come in and compete for a starting job in 2023 as he develops into the CB1 Pittsburgh needs to round out its defense on the backend.

Analysis: GM Omar Khan and Assistant GM Andy Weidl aren’t fooling around this offseason as they add some much-needed beef and nastiness in the trenches. While I initially wanted to slot C John Michael Schmitz here as a potential foundational piece at center, Pittsburgh more likely would opt to keep Mason Cole at the pivot and opt to address one of the key weaknesses on the left side of the offensive line.

O’Cyrus Torrence is the definition of a road grader, having the size and power to displace almost any man off his spot in the running game. Torrence also has impressive athleticism for his 6’5, 347lb frame, being able to mirror in pass protection and find work while on the move. Torrence transferred to Florida from Louisiana Lafayette this spring and ironically would replace fellow former Rajin Cajun Kevin Dotson at the LG spot. Adding Torrence to the OL would vasty help Pittsburgh’s ability to run up the middle while providing a solid pass protector that can develop into a long-term starter at the pro level.

Analysis: Pittsburgh has a well-established history of drafting receivers in the second round, most recently selecting George Pickens last season with the team taking JuJu Smith-Schuster, James Washington, Diontae Johnson (third round), and Chase Claypool in four-straight drafts. Even when there is a more pressing need available on the board, the Steelers never scoff at the chance to add a playmaker to the team at a value. They did so last season drafting Pickens coming off an ACL tear and do so again here selecting WR Jaxon Smith-Njigba out of Ohio State who has battled various injuries throughout the season.

However, Smith-Njigba is just one year removed from posting 95 receptions for 1,606 yards and nine TDs, being the Buckeyes’ best WR on the team over Garrett Wilson and Chris Olave who are lighting up the NFL as rookies. Normally, Pittsburgh tries to avoid risk in the draft, but they showed faith in Pickens coming off injury last year and should JSN be healthy come draft day, adding him beside Pickens and Diontae Johnson would present a vaunted WR core where Smith-Njigba could thrive as a big slot like JuJu did while also getting some run outside.

JAXON SMITH-NJIGBA FOR THE LEAD!!

THIS MAN CAN'T BE STOPPED pic.twitter.com/AgDWhFSas6

Analysis: Pittsburgh hasn’t gotten the level of play they wanted out of Myles Jack this season and while Devin Bush has played better in 2022, he remains a free agent after the season. Jack Campbell from Iowa makes plays all over the field as a downhill run stuffer as well as a capable zone coverage defender. He isn’t the most dynamic athlete in terms of burst or twitch, but the 6’5, 243lb senior has the size, tenacity, and instincts you want in an off-ball linebacker that can play in the middle of an NFL defense for years to come. He is a sound, talented defender in his own right and should be a capable starter alongside Jack in 2023 if Pittsburgh elects to not remain Bush this offseason.

The Pick-6️⃣ was taken off the board (stepped out of bounds), but it's still an INT.

Analysis: With Tyson Alualu, Larry Ogunjobi, and Chris Wormley all scheduled to hit free agency this offseason, the Steelers need to add more depth and youth along the defensive line. Keeanu Benton from Wisconsin isn’t a household name yet in the media, but he remains one of the better interior DL prospects in this draft class. Benton has great size for the position to fit Pittsburgh’s scheme (6’4, 315lb) along with the physicality and play strength to hold his own as a run defender. Benton also brings some pass rush juice to the table, having seven sacks in the last two seasons to make him a potential three-down contributor and possible future starter on the defensive front.

As a true sophomore, #Wisconsin DT Keeanu Benton caught my eye with his athleticism and power combination despite his limited snap count.

Been consistently a run disruptor with pass rush upside. Excited to see him down in Mobile.

Analysis: The Steelers’ EDGE depth was challenged this season once T.J. Watt went down to injury Week 1, forcing Pittsburgh to rely on Malik Reed and other backups to try and produce a pass rush. They wait until the sixth round in this scenario to address the position but do so selecting Jeremiah Martin out of Washington who is in the midst of a breakout season for the Huskies. Martin has amassed 8.5 sacks as a redshirt senior, showcasing good burst and bend around the edge. He has a thick, dense frame (6’4, 261lb), giving him quality size to set the edge against the run and can chip in 10-12 snaps a game to give Watt and Alex Highsmith a breather.

Analysis: Many may not like the Steelers wait until the seventh round to address OT in the draft, but they have shown us time-and-again that they place less of a priority on the position than other teams in the league. Factor in that they have stood by LT Dan Moore Jr. and RT Chukwuma Okorafor, it’s more likely that the team will look to add depth on Day Three than a starter in the first round.

However, Pittsburgh adds quality depth here in the seventh, going back to Gainesville to select a player I personally worked with by in 2018: OT Richard Gouraige. “Richie” came into Florida a little light, needing to add strength and size to his frame. However, the now 6’5, 308lb senior always had good footwork, possessing the quickness to mirror side-to-side in pass protection as well as kick step to set the depth of the pocket. He is the ideal developmental tackle prospect who has the footwork and athleticism to develop into a capable starter in the future as he starts his career as the swing tackle behind Moore and Okorafor.