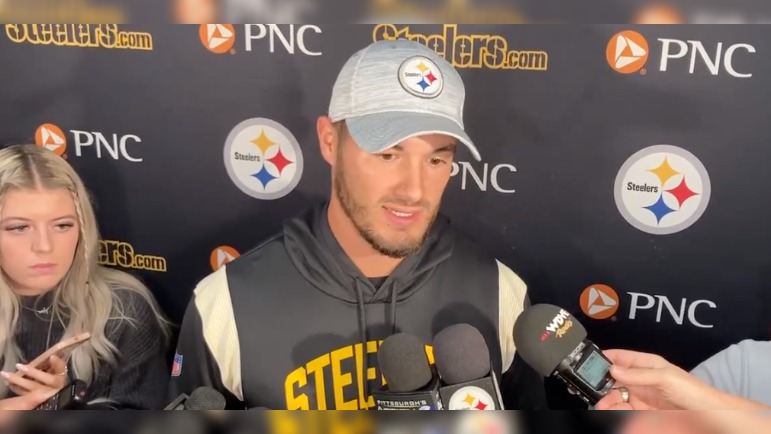 The storyline for the Pittsburgh Steelers in lead up for their Week 15 showdown on the road against the Carolina Panthers revolves around who exactly will be under center when the offense takes their first snap on Sunday.

QB Kenny Pickett suffered a concussion last week against the Baltimore Ravens, and while he has logged limited practice session throughout the week, HC Mike Tomlin mentioned on Friday that Pickett is doubtful for Sunday’s game, almost certainly ruling him out giving the lack of preparation in team work as well as the multiple hoops he must jump through to clear concussion protocol.

Tomlin mentioned earlier this week during his press conference that he was having both Mason Rudolph and Mitch Trubisky take snaps with the starters, preparing both guys to potentially start. Still, Tomlin mentioned with his Pickett announcement Friday that he isn’t announcing the starting QB until tomorrow.

QB Mitch Trubisky was approached in the locker room on Friday and was asked about this week of preparation given the fact that the starting job is far from a guarantee for him this week. Trubisky answered that he is approaching this week like any other week to step in and play as well as make his teammates better.

“Just continue to prepare like I always do,” Trubisky said to the media regarding his chances of starting Sunday against the Panthers on video for Jeff Hathhorn’s Twitter page. “Like no matter what your role is, you are prepared with the game plan. Just help lead these guys any way you can and when [Tomlin] makes the decision, we roll with it. But like I said, great week of preparation. Everybody was locked in. Got some good work in. Feel good with the gameplan, so we’ll see where we go.”

#Steelers Mitch Trubisky on preparation as he says he doesn’t know if he will start ⁦@937theFan⁩ pic.twitter.com/ZJFNRjECGJ

Trubisky’s status as the clear backup behind Pickett is in serious doubt after he threw three INTs when he came in to replace Pickett against the Ravens, effectively losing Pittsburgh the game. Tomlin was critical of Trubisky’s performance after the game, stating that you can’t turn the football over and expect to win football games.

With Pittsburgh on the verge of being mathematically eliminated for playoff contention this week, Tomlin will have to wrestle with the decision of rolling with his former starter one more time after blowing a chance to get a step closer to .500 or go with Rudolph who hasn’t played a snap this season but has shown he can manage a football game in the past and had a strong preseason. We will likely know Tomlin’s final decision come Saturday afternoon.