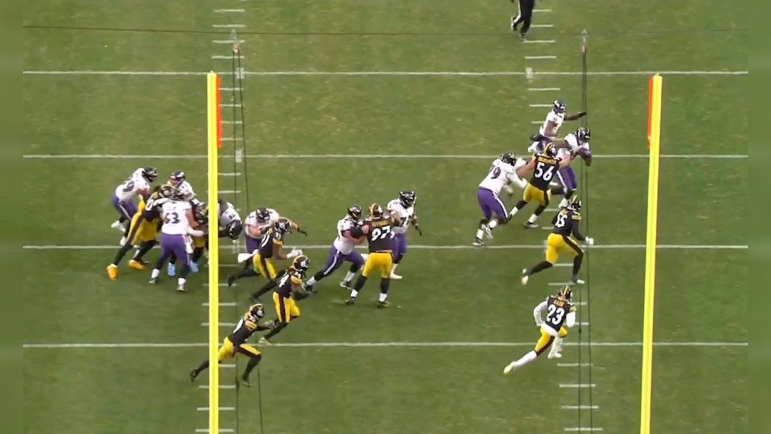 If the Steelers defense is doing one thing at an exceptionally high level at the moment, it’s at least basic.

The Steelers are currently tackling extremely well since the bye week, and while the Baltimore Ravens ran all over them Sunday at Acrisure Stadium, the Steelers were very good at tackling at the point of contact, not allowing the Ravens to gain additional yardage off of missed tackles.

In the 16-14 loss to the Ravens, the Steelers missed just two tackles, recording just two misses for the second time in a month, tying the best-ever single game mark in the seven years I’ve charted missed tackles for Steelers Depot.

Even on a day in which the Ravens ran right through the Steelers, the black and gold deserve some credit for tackling very well. Just two missed tackles in a game like that against a run-heavy approach like Baltimore’s is rather remarkable.

Neither of the missed tackles from Alex Highsmith or DeMarvin Leal were egregious, but you’d still like to see those two clean it up. On the year, Highsmith is up to six misses. He’s had a great season, but it could be even better if he cleans up the tackling issues.

He was in position in the fourth quarter to record a big tackle for loss on Baltimore running back Gus Edwards behind the line of scrimmage thanks to his ability to set the edge. He just wasn’t physical enough though and didn’t attack, allowing Edwards to dance around him.

Highsmith plays this rather well, but he has to be a bit more aggressive, considering the situation with the Ravens already in scoring position and the Steelers about to be down two scores, attacking Edwards downhill, trying to create a splash play. In the end, it still went for a tackle for loss, but it’s a missed tackle Highsmith was rather frustrated with.

Earlier in the second half, Leal missed a tackle on a key J.K. Dobbins run. With the Ravens backed up deep in their own territory after the third and final interception from Mitch Trubisky of the day, the Steelers knew what was coming from Baltimore with backup UDFA QB Anthony Brown on the field.

The Ravens were going to run, and the Steelers couldn’t stop them.

Dobbins gashed the Steelers defensive front on the run. Leal does a nice job in backside pursuit to track the play, but he comes in out of control and allows Dobbins to cut back inside of him in space, causing the missed tackle.

Fortunately for the rookie, the Steelers had a host of players around to clean it up, but Leal has to be a bit better with his angles and overall technique when closing in.

Offensively, the Steelers were able to move the ball on the Ravens, but the turnovers killed them, leading to just 14 points scored. On the day, the Steelers forced six missed tackles, winning the tackle battle by a +4 margin, improving to 9-3-1 on the season.

Against the Ravens on Sunday he was really solid in pass protection, standing tall in the face of the rush to deliver some blows to linebackers, giving Mitch Trubisky time to throw. He even helped Trubisky out as a receiver on a key third down, too.

Warren caught this checkdown from Trubisky and forced two guys to miss, turning a short completion into a 14-yard gain to move the chains and provide the Steelers offense with a bit of a spark in the fourth quarter.

Of course, that drive ended in the blocked field goal, but it doesn’t take away from the impressive effort Warren had to make linebackers Roquan Smith and Tyus Bowser miss in space.

Earlier in the second half, one play before Trubisky’s final interception of the day, the much-maligned Diontae Johnson made a great play to move the chains, setting up the shot play.

Working out of the slot, Johnson does a great job creating quick separation on the out route against Odafe Oweh, who was no match for him in space. That said, Oweh is able to recover and get his hands on Johnson after the catch.

To his credit though, Johnson shook off Oweh to move the chains, keeping the Steelers drive alive, giving them some hope offensively. For all the criticism he gets for running backwards after the catch — and rightfully so — he can still do stuff like this with the football in his hands.