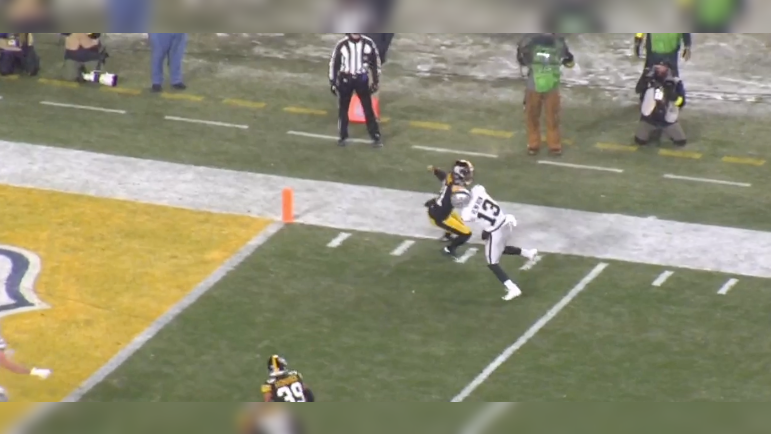 Throughout much of the 2022 season, the Pittsburgh Steelers have been rather good in arguably the most important category of defensive football: tackling.

It’s the most basic part of playing defense at any level of football, and yet teams struggle mightily in that department year after year, especially at the college and professional level.

This season though, the Steelers haven’t really struggled, cutting way down on the misses per game compared to years past.

In frigid, poor conditions on Christmas Eve, the Steelers took a slight step back against the Las Vegas Raiders in the tackling department, finishing with eight missed tackles, two of which resulted in the Raiders’ lone touchdown of the game.

Considering how cold it was on Christmas Eve, and how poor the conditions were overall, just eight missed tackles aren’t as bad on paper as it looks.  It is the highest mark of missed tackles that the Steelers have had since the Monday Night Football matchup against the Indianapolis Colts in Week 12.

The key for the Steelers though was that many of the misses came in the first half of the game. That said, two of the misses were critical in the 13-10 win over the Raiders.

Early on, Minkah Fitzpatrick missed one of his two tackles in the game.

Fitzpatrick does a nice job of squeezing down on the play, filling his lane, and being there to make a play on Las Vegas running back Josh Jacobs behind the line of scrimmage. He just doesn’t finish though, going low on the big, powerful running back and not wrapping up.

That allowed Jacobs to spin out of it, but he spins right into the waiting arms of defensive tackles Larry Ogunjobi and Montravius Adams for a short gain on the play.

Later on, in the first Las Vegas drive of the game, cornerback Cameron Sutton and safety Tre Norwood missed two crucial tackles on one play, which ultimately ended up in the end zone.

Sutton correctly attempts to make a play on the football on the out route, but he’s just a tick slow, allowing Las Vegas receiver Hunter Renfrow to make the catch. With Sutton making an attempt on the football though, he has to be certain he can make the play.

Clearly, he doesn’t and then tries to get Renfrow’s legs on the way down. He misses though, allowing Renfrow to break free and work up the sideline.

Norwood’s miss on the play is worse. He takes a terrible angle to Renfrow and doesn’t use the sideline as an extra defender, allowing the shifty slot receiver to cut back inside and dive into the end zone for the score. If you’re going to miss tackles, they can’t end up in the end zone, but the two from Sutton and Norwood did and put the Steelers in a 7-0 hole.

The Raiders run a little double play-action in the backfield with Jacobs and star wide receiver Davante Adams looping back around off of the play-action.

It’s designed to get Adams into space and get him an easy touch on a swing route out of the backfield and it works perfectly, pitting Adams against Spillane in space. Spillane reads the play well, but he just doesn’t finish the play.

He hesitates just enough when closing in on Adams that the star receiver is able to accelerate past him, up the sideline to move the chains, picking up an additional 16 yards after Spillane’s miss.

On the same night that the franchise honored the late, great Franco Harris with his jersey retirement, current Steelers running back Najee Harris paid tribute with his physicality and play-making late.

The hurdle of Las Vegas cornerback Nate Hobbs in the fourth quarter has certainly made its rounds, but his play on the final scoring drive to force three missed tackles and turn a short dump-off into a 19-yard gain was eye-opening.

Harris did a great job of picking up an additional 10 yards by simply putting his head down and leaning on his size and strength. Instead of dancing in the middle of the field, Harris bowled through the two initial Raiders defenders and then broke a third tackle, moving the chains with the 19-yard gain, giving the Steelers serious life on the drive.

I really did not like the decision to try and block Crosby with a tight end throughout much of the game, considering how much of a game-wrecker he is. He nearly did it here as well.

Crosby has a great get-off and knows what’s coming, shooting into the backfield to meet Harris just after the handoff, avoiding the wham block from Freiermuth on the inside zone. Harris does the rest though, running right through Crosby’s arm tackle, avoiding the tackle for loss, turning a 2-yard loss into an 8-yard gain.