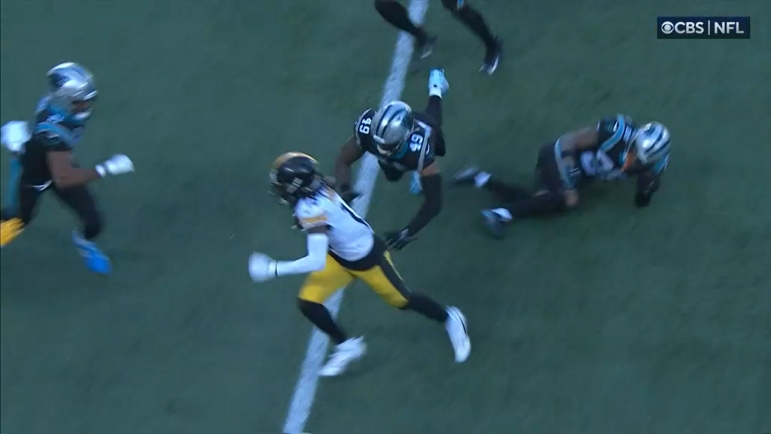 Dating back to the Week 9 bye week, the Pittsburgh Steelers have played some pretty solid football overall in all three phases. It’s no surprise that since the bye week the Steelers are 4-2 in that span.

One key reason is because Pittsburgh has done a great job of tackling consistently defensively. In the six games since the bye week, the Steelers have missed just 25 total tackles, an average of 4.16 missed tackles per game. Compared to recent seasons, that’s a remarkable number from the black and gold.

The Steelers continued that strong showing in the tackling department Sunday on the road against the Carolina Panthers, recording just five missed tackles in the 24-16 win, including none in the first half and just three total by the defense overall.

Of the five missed tackles on the day, the most egregious one by the Steelers happened to be Robert Spillane’s on Carolina Panthers running back Chuba Hubbard on an option route out of the backfield in the third quarter.

Spillane is supposedly the Steelers’ best coverage linebacker, but he continues to struggle in coverage throughout this season, and for most of his career if we’re being honest. Sunday’s miss against Hubbard showed his limitation in coverage once again.

He’s too far away from Hubbard in man coverage and gets caught flat-footed on the option route as Hubbard breaks toward the outside to Spillane’s left. He doesn’t close enough ground and that leads to a feeble diving tackle attempt, resulting in Hubbard easily making him miss.

The miss from Spillane results in a 45-yard gain on the play. The miss led to all 45 yards on the play.

Three plays later, following Marcus Allen’s dreadful personal foul penalty during a TV timeout, safety Terrell Edmunds — who had a great day overall in the box against the Panthers — recorded his lone miss of the game filling downhill from the safety position against Panthers running back D’Onta Foreman.

Edmunds does a great job working downhill against the run, filling the lane quickly to meet Foreman at the line of scrimmage. He’s just unable to finish the play though as Foreman steps through the tackle attempt. Edmunds gets tripped up a bit on the tackle attempt by the legs of the Carolina Panthers’ lineman who is engaged with Cameron Heyward, which largely results in the miss for the solid safety.

Late in the fourth quarter, Marcus Allen and Derek Watt recorded missed tackles on a kickoff attempt after kicker Chris Boswell made it a 24-13 game.

If Allen is going to be taking terrible penalties like the one he did to extend a scoring drive for the Panthers, he can’t be missing tackles on special teams, which is why he’s on the team overall.

He came up small on the kickoff attempt though, missing Raheem Blackshear one on one in space. Then, Watt misses the follow-up as Blackshear picked up an additional 17 yards to set up shop for the Panthers on the final drive of the game at their own 37-yard line.

Najee Harris was simply dominant on the day in the missed tackles department. He ran hard behind his pads and was determined to dish out punishment and make it a long, long day for the Panthers.

He did that and then some, but I’m not going to highlight him here.

Instead, Jaylen Warren and Diontae Johnson deserve some love.

Warren was rather physical on the day as well and really got after the Panthers.

Late in the first half with the Steelers all but conceding to go to the half, Warren forced two missed tackles behind the line of scrimmage to rip off an 8-yard run.

Look at the quick stiff arms from Warren to fend off Carolina defensive tackle Matt Ioannidis and safety Xavier Woods to turn the corner. I debated giving him a forced missed tackle for the hurdle on cornerback Jaycee Horn, but Horn was credited for the tackle on the play.

Then, in the third quarter on the 21-play drive, Diontae Johnson turned in one of his best plays of the season, even with the personal foul penalty.

Catching the ball short of the sticks, Johnson forced three defenders to miss in space along the boundary to move the chains. While there is some frustration this season with Johnson due to his propensity to run backward after the catch and lose yardage while being hesitant against contact, he did an awesome job Sunday of fighting for every single blade of grass with the football in his hands.

The personal foul penalty can be cleaned up, but you can’t teach the type of elusiveness that Johnson has in space with the football.