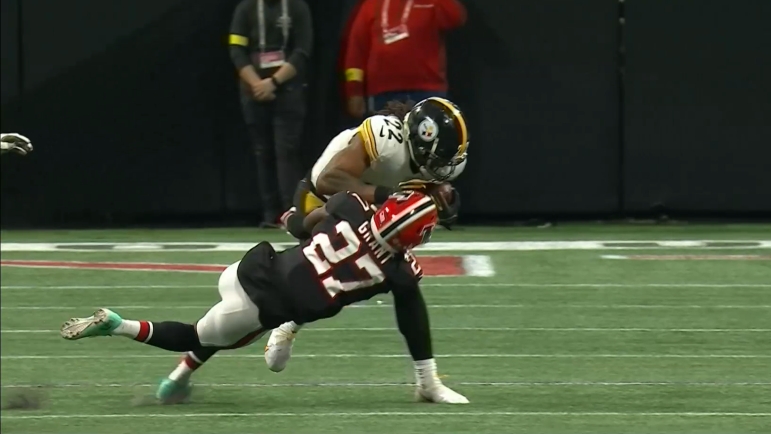 Throughout the 2022 season, the Pittsburgh Steelers have performed rather well in the tackling department defensively.

After years and years of struggles in that area of the game, the Steelers have turned things around the last two seasons,

That turnaround continued Sunday against the Atlanta Falcons on the road in Week 13, recording just three missed tackles against the Falcons, the second-lowest mark of the season for the black and gold.

Against a run-heavy team that is one of the more physical teams in football in the Falcons, missing just three tackles in the win is rather impressive by the Steelers. Week after week, the Steelers have been rather sound in the missed tackles department.

The three misses is the second-lowest of the season and the second-lowest number in the seven years I’ve tracked missed tackles for Steelers Depot. Credit where credit is due: this defense is tackling very, very well.

The three misses on Sunday against the Falcons weren’t egregious by any stretch of the imagination, though one resulted in a touchdown for the Falcons.

Let’s start at the beginning.

Third-year pass rusher Alex Highsmith has really turned into a formidable force off the edge for the Steelers. He’s a legitimate high-level run defender and has really taken the next step this season as a pass rusher. He missed a big one against the Falcons in the first quarter though.

Highsmith does a great job of getting penetration off the snap after the Falcons motion away the blocking tight end on his side. Highsmith recognizes it and gets off the ball in a hurry. His get-off allows him to gain enough depth to get around the pulling left guard for a shot on running back Cordarrelle Patterson.

Patterson is able to turn a loss into a decent gain of seven yards, moving the chains in the process.

In the second quarter, T.J. Watt missed his lone tackle of the game on a run by rookie running back Tyler Allgeier. Watt tried to go for the punch out rather than wrapping up.

While he was dealing with a rib issues in the win, Watt did a nice job of fighting off the block to get a shot at Allgeier. Instead of going for the stop, Watt tried to do too much by punching at the football. Obviously, Watt missed with the punch and didn’t wrap up, allowing Allgeier to rumble another 20 yards on his 21-yard carry in the second quarter that sparked the Falcons’ offense.

Finally, Minkah Fitzpatrick missed a tackle late in the game that allowed the Falcons to find the end zone for the lone time on the day.

The star safety does a really good job of reading quarterback Marcus Mariota and the route concepts on the play-action pass, firing downhill towards tight end MyCole Pruitt on the delayed release.

He’s right there for the tackle inside the 5 yard line, but he doesn’t wrap up properly, allowing Pruitt to spin out of the tackle and stretch the ball across the goal line for the touchdown.

While Fitzpatrick’s tackle might not have made a difference on the drive in the end, it would have still given the Steelers some blades of grass to defend defensively.

Offensively, the Steelers had a field day in the forced missed tackles department, forcing 11 misses in the win over the Falcons, winning the tackle battle by a mark of +8, one of the best differentials of the season. That improves the Steelers’ record in the tackles battle to 8-3-1 on the season.

He ran with serious power and determination, throwing defenders — literally — to the ground, picking up extra yardage all on his own after contact.

On the first drive of the game you could see what type of day it was going to be for Harris. He throws the Falcons’ defender off of him in the hole and puts his head down to pick up another 5 yards in the process.

Later in the first quarter, Harris picked up the highlight-reel stiff arm, throwing the Falcons defender to the turf, causing him to bounce off the turf in laughable fashion.

When he’s fully healthy there are few more powerful running backs in football that can break tackles at the rate Harris does.

They’ll replay that one for a long, long time.

They’ll do the same thing for Pat Freiermuth’s 57-yard rumble down the left sideline against the Falcons.