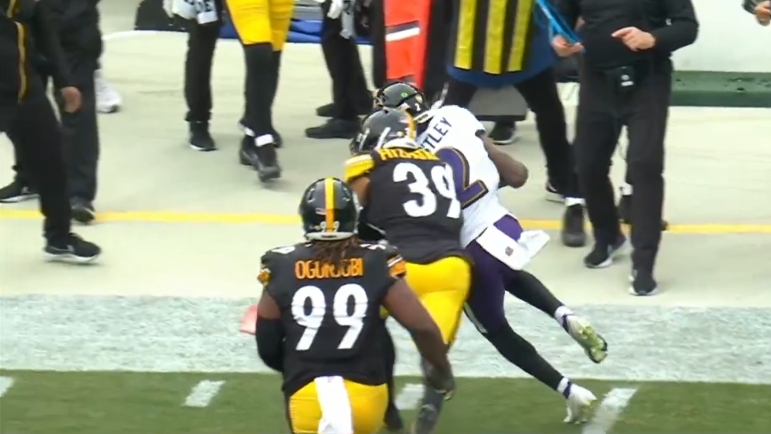 The Pittsburgh Steelers’ hopes of getting back into the playoff hunt hit a bump in the road after losing to the Baltimore Ravens Sunday 16-14. The offense put up only two TDs on the game after QB Kenny Pickett got knocked out of the game with a concussion. The defense didn’t do any better in this one as the Ravens rushed for 215 yards as a team, gashing the Steelers on the ground throughout the game.

S Minkah Fitzpatrick was interviewed in the locker room after the game and was asked about the team’s loss, pointing to the defense’s poor performance against the run as a defining moment that sealed the Steelers’ fate in this one.

“A huge missed opportunity for us,” Fitzpatrick said to the media in the locker room on video from Chris Adamski’s Twitter page. “We think we could have beat them. We knew what they were going to do. We knew we had to stop the run. We knew that we had to take deep balls off of us. We didn’t do one of those few things and they won the game. Like I said, this is a huge, huge missed opportunity for us.”

Minkah Fitzpatrick on the loss pic.twitter.com/zX6hPS75xg

The combination of Tyler Huntley and Anthony Brown at QB only threw for 94 yards on the game for the Ravens, completing 11-of-17 pass attempts. Baltimore’s offense became one-dimensional early as they leaned heavily on the run but saw sustained throughout the game despite Pittsburgh knowing what was coming. The Ravens rushed the ball 41 times in the game for 215 yards with RB J.K. Dobbins leading the way after being activated yesterday off IR with a knee injury, carrying the ball 15 times for 120 yards and a TD including a long of 44 yards.

With QB Lamar Jackson out of this game with a knee injury, it was expected that the Ravens would lean on the running game more while being an already run-heavy attack. They did so even more than expected after Huntley left the game and was replaced by UDFA QB Anthony Brown who only completed three passes for 16 yards. Still, the Steelers defense who had played better against the run in recent weeks got shredded by Baltimore’s rushing attack, effectively ending their chances of sneaking into the playoffs as the AFC’s seventh seed.