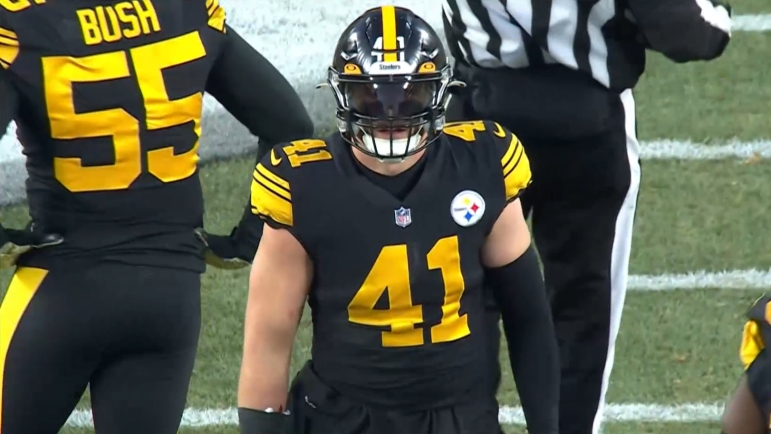 It wasn’t long ago that Robert Spillane was nearly a total unknown, an undrafted free agent sitting on the Pittsburgh Steelers’ practice squad. He’s hard to ignore now, playing 100% of the snaps the last two weeks. With a matchup against the Baltimore Ravens, the Steelers are likely to again lean on Spillane and his physical brand of run defense.

Speaking with reporters Tuesday, Mike Tomlin praised not only Spillane’s role but his journey and path into the lineup.

“We just like what Rob has been doing,” Tomlin said in his presser carried out by the Steelers’ YouTube channel. “He plays physical. Rob is a guy that has been in continual growth since he’s been here. Coming in as an undrafted guy and practice squader and working his way through. Making the team and becoming a core teamer and part-time defender and now increasingly so almost an every-down defender. I just think what you’re seeing is the maturation of growth process of a quality professional.”

Before the NFL, Spillane starred at Western Michigan, recording over 300 tackles in his college career, 32.5 tackles for loss, 10 sacks, and four career interceptions. The grandson of Heisman Trophy winner Johnny Lattner, Spillane wasn’t the biggest or fastest player and went undrafted in 2018, signing with the Tennessee Titans. He appeared in two games with them his rookie season but was waived that October and wasn’t on an NFL roster until February when the Steelers inked him to a futures contract.

From there, he climbed every rung of the football ladder. He made the practice squad, was cut for two weeks, brought back, and then promoted to the 53-man roster in early November. From there, he excelled on special teams, finishing the year as one of the team leaders in tackles despite playing only half a season. Tomlin’s praise has been consistent with him saying this back in 2019.

“Some guys been preparing behind the scenes for an extended period of time in some instances and getting the opportunity to stand and deliver for us big in moments…guys like Robert Spillane, who has been a practice squad guy, elevated in recent weeks and has been a consistent contributor on our coverage units.”

Spillane became the #3 inside linebacker and even though Pittsburgh often explored other options, trading for Joe Schobert, signing Myles Jack, Spillane has always found a way into seeing defensive snaps. After going semi-viral for his goal line crunch on Derrick Henry, Spillane has worked in run-heavy situations while also serving as the team’s dime linebacker. Though he’s a marginal athlete, the team has consistently talked up his football IQ and he works well on blitzes and stunts.

With Myles Jack battling injuries and literally limping to the finish line, Spillane hasn’t missed a snap the last two games. Against the Raiders, Jack only worked in the team’s base defense while Bush only worked in nickel. Spillane played everything, base, nickel, and dime. On the year, Spillane has logged a career-high 62 tackles, three for a loss, with one sack, while still serving as a multi-phase special teamer, though his role there has been reduced. For example, he isn’t part of the team’s kickoff coverage anymore, at least not when he’s in line for significant defensive snaps.

“We believe in being a part of the development of guys and watching them grow and develop within a system of football.”

This offseason will tell Spillane how much the Steelers really believe in him. He’s set to be an unrestricted free agent, one of several off-ball linebackers in that position, joining Devin Bush and Marcus Allen. Ever since Ryan Shazier’s injury, the Steelers have had a revolving door of starting inside linebackers. Maybe Spillane will return and start. Or maybe the team will keep flipping through other options.