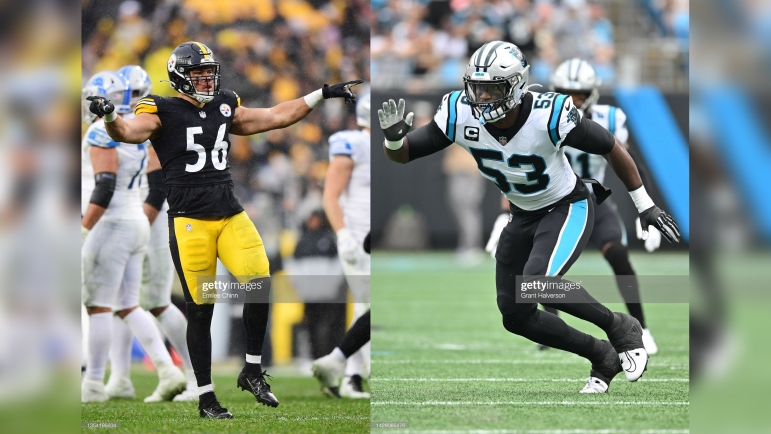 A first-round draft pick out of Florida St. in 2019, Brian Burns has been a consistent and consistently-ascending player for the Carolina Panthers over the past four years. The edge rusher already has a career-high 10.5 sacks this season with four games to play, but still has 36 total in his career, never with fewer than 7.5 in a season.

Not the same pedigree or an identical path, but Pittsburgh Steelers head coach Mike Tomlin has seen this before. T.J. Watt was not the comparison that he invoked when it comes to Burns—Watt is already a more than established juggernaut with the DPOY hardware to prove it—but rather Alex Highsmith, the third-year edge rusher who leads the team with 10 sacks.

“On defense, man, I have been really impressed with Burns,” Tomlin said during his press conference yesterday, via transcript. “It’s cool to kind of watch a guy evolve and develop as a player. I’ve watched it firsthand in Highsmith here, but it’s cool to watch a guy that you don’t see every day like Burns really evolve.”

A third-round draft pick in 2020 out of a small school, Highsmith played a rotational role as a rookie behind starter Bud Dupree, moving into a full-time starting role last season. In part due to injury, he got off to a slow start, but finished the year on a high note with six sacks on the year. As mentioned, he is up to 10 now.

“I think he is a dominant edge player, a guy that needs to be reckoned with, a guy that you’d better be conscious of where he is,” Tomlin said of Burns after drawing comparisons to Highsmith. “A guy that you maybe even need to be prepared to defend or minimize with schematics, particularly when you’re in one-dimensional circumstances.”

The Steelers are definitely going to have to reckon with Burns this week, who has 5.5 sacks in his past five games as well as nine quarterback hits. Highsmith has cooled a bit with no sacks in his past two games, but still has 3.5 in the five games overall since their bye week. And he also has two forced fumbles in that span compared to Burns’ one.

It doesn’t hurt to have Watt on the other side of him, as well, even if production has been slow to come for the banged-up reigning best defender in football. This season has been a litany of injuries, but he is still a dynamic presence that has to be accounted for when he is on the field, and his 50 percent is still better than the 100 percent of most.