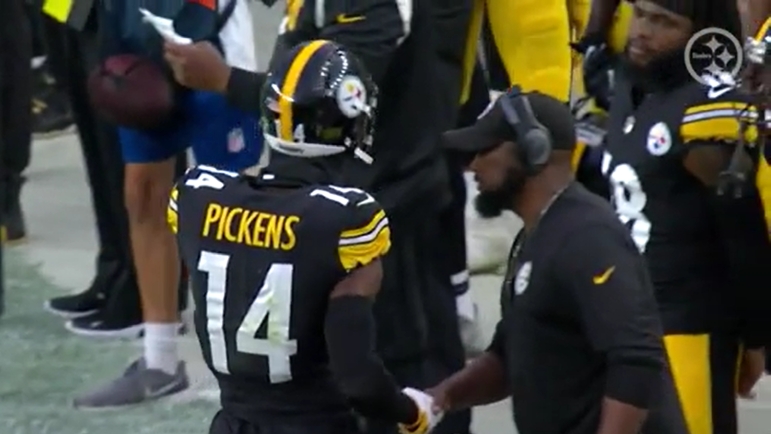 The Pittsburgh Steelers’ Mike Tomlin is among the highest-paid head coaches in the NFL. Nobody should be surprised by that, whether or not they disagree with it. While fans would rather that he be most associated with bringing Super Bowls to the city, the truth is that his most strongly associated trait is his ability to influence and motivate his players.

We’ve been hearing the same stories every year for more than a decade and a half since he’s been on the job. 2022 is no different, as he’s had the same impact on the latest rookie class. Second-round pick George Pickens, for example, talked about his coach during an appearance on Arthur Moats’ podcast.

“He’s a huge mentor. His title says coach but I see him as more than that”, the rookie receiver said, repeating the word mentor several times throughout his answer. “He don’t really see stuff in the negative light. It could be the worst, worst possible situation. He’ll probably make light of it and it’ll probably be true. Like, ‘Oh, I could get out of this’ or ‘I could do this’”.

He joked that it’s like a superpower that he has to be able to see beyond the issues and to the solutions. It probably ties in with a lot of his Tomlinisms about smiling in the face of adversity and all that. “It’s cool to have him as a coach, but I really count him as like a mentor”, Pickens said.

That may have been needed a time or two during his rookie season when he grew frustrated about his role. While he has been playing consistent snaps, averaging close to 80%, his target distribution can go up and down pretty significantly.

Thus far, he has seen 74 targets on the season, catching 47 passes for 700 yards and three touchdowns. He also has one rushing touchdown. He secured the game-winning grab on Saturday night in the Steelers’ latest win over the Las Vegas Raiders, going 5-for-5 in that game for 57 yards, culminating in the 14-yard score.

Pickens has four games this season in which he has put up at least 75 receiving yards. His career high came back in Week 4 when he caught eight passes on eight targets for 102 yards. Many saw it as a harbinger of things to come, and he did go 6-for-8 again a week later for 83 yards, but his production has seesawed since then.

You can probably credit Tomlin at least partially for helping to keep him as even-keeled as he has been. There have been a few moments where he has lost his composure and shown his frustration, but he’s moved on throughout it and continued to go to work.