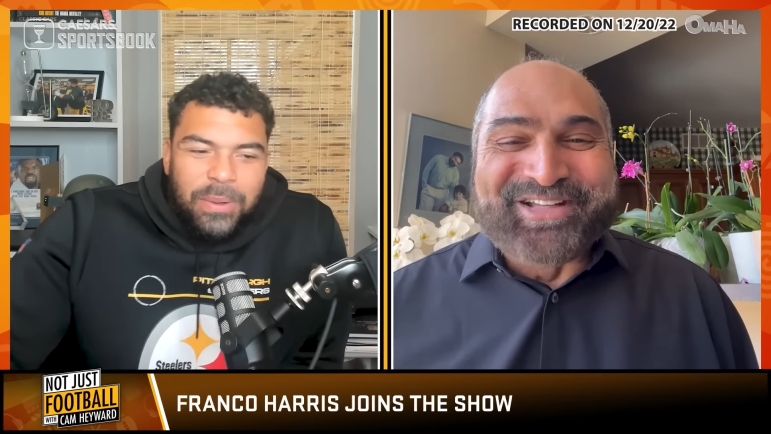 Franco Harris passed away suddenly overnight on Tuesday at the age of 72. There was no cause of death given, and his death was considered quite a surprise. He had been very active in recent days, participating in interviews and events anticipating today’s events commemorating the 50th anniversary of the Immaculate Reception.

The closest we have come to any kind of account of what happened came Friday evening from Hall of Fame wide receiver Michael Irvin, who has been in Pittsburgh as part of the NFL Network’s coverage of the game. He hopped on 93.7 The Fan and spoke about Harris, acknowledging that he had spoken to his family.

“His wife will tell you, the thing is, there was so much going on for him that he was telling everybody, ‘Yes’. He was giving everybody a ‘Yeah,’ because that’s the type of person he is, he wants to try to help everybody out”, he told host Andrew Fillipponi. “He came home, said he was exhausted, sat down and when she went to go brush her teeth and came back, he had moved from time to eternity”.

Irvin repeatedly mentioned that Harris felt exhausted. Surely he had been running around quite a bit in recent days and perhaps even weeks in anticipation of the weekend’s events, which would have taken some toll on his energy reserves—but perhaps wouldn’t result in his death.

Fillipponi asked Irvin directly if he had spoken to Harris’ family and he confirmed as much, saying that you hear how things transpired. He said that Hall of Famers also get that sort of information when one of their own has issues.

“Yeah, he was doing fine”, he said when asked if he was dealing with any illness at the time. “Everyone was doing fine. That’s what’s so surprising”.

Harris was participating in a number of interviews over the course of the days prior to his death. He was on Cameron Heyward’s podcast via Zoom, and some observed that he did sniffle every so often. He also could perhaps said to have appeared tired. But that doesn’t seem out of the ordinary for a 72-year-old man running around.

Perhaps we’ll know more in time, but this is the way it goes, sometimes. Everyone is looking for an explanation right now given the enormity of his celebrity and particularly at this time, but that doesn’t mean there will be a satisfying one.