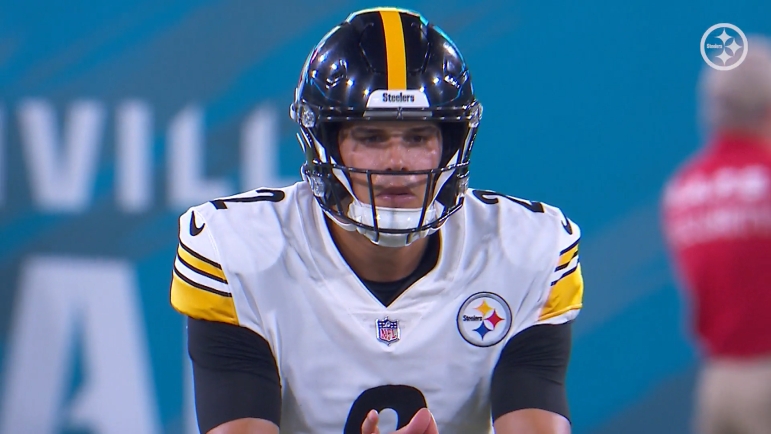 Reporters surrounded Mason Rudolph’s locker Monday morning which can only mean one of two things. Some quarterback ahead of him is hurt. Or someone ahead of him is playing poorly. In this case, it might be both.

Kenny Pickett’s status for Sunday’s game against the Carolina Panthers is uncertain, in concussion protocol after leaving early in Sunday’s loss to the Baltimore Ravens. Mitch Trubisky stepped in and moved the offense but also stalled it out with three critical interceptions.

So that leads attention back on Rudolph, who told the media earlier today he’s ready for any chance he might get.

“I try to stay consistent all year,” he said as tweeted by The Trib’s Chris Adamski. “Whether it’s the film aspect or just prepping, doing what I can to help the other guys prepare…then just physically, don’t get a lot of reps in practice. Finding time to throw. During special teams…put more pressure on myself to be perfect in individual. Those short periods that you have.”

Mason Rudolph says he will know when we all know if he will be taking more reps this week. Says he’s kept himself prepared pic.twitter.com/WAFAi7nXtO

Since the regular season began, Rudolph has served as the #3 quarterback behind Pickett and Trubisky. He entered the season theoretically in the mix to be the team’s starter, the Steelers searching for Ben Roethlisberger’s replacement. But Rudolph quickly fell out of favor, working with the 2’s at the start of training camp but the clear #3 by summer’s end.

He’s the only Steelers’ quarterback who has yet to appear in a game this year. If he plays at any point over the final four weeks, he’ll tap into previous experience. He’s played in 17 games, starting ten with 16 career touchdowns to 11 interceptions. He started one game last season on emergency notice, filling in for Ben Roethlisberger who tested positive for COVID in a tie against the Detroit Lions.

If Pickett is cleared and receives enough practice reps, he’ll start against the Panthers this weekend. If not, there will be a question as to who will start, Trubisky or Rudolph. Trubisky seems to be the most likely option, the #2 who is capable of moving the offense though his interceptions and admitted overaggression led to costly mistakes. Rudolph is the “safer” option more likely to play within structure but Trubisky’s play hasn’t been bad enough to warrant Rudolph jumping him in just one week.

But if Pickett is held out, Rudolph will at least see more reps in practice. And if he’s the backup this weekend, he’ll be one snap away from seeing the field for the first time in a year. There’s only four more weeks left with Rudolph in a Steelers’ uniform. A free agent after the season, he’s certain to be playing elsewhere in 2023. For what team and what role is unclear but there’s no reason to believe he’ll want to remain in Pittsburgh, who has actively searched for other options ever since drafting him.