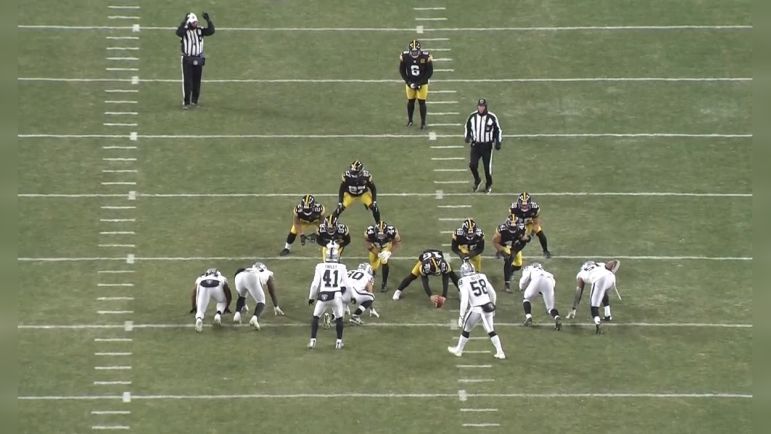 When the Pittsburgh Steelers placed LB Marcus Allen on injured reserve Tuesday, it was met with one of two reactions. Nothing, a shrug of the shoulders, or snark, jokes over his foolish penalty against the Carolina Panthers. If anything, the move created excitement at the prospect of rookie Mark Robinson getting a helmet, something we wrote about the day after the move was made.

I know I’m spending a lot of space writing about Allen but to look at it from another angle, his absence may be a serious factor in Sunday night’s game against the Baltimore Ravens. While Allen was *just* a special teamer, not logging a single defensive snap this season, he served as the team’s upback on the punt team. Also known as the PP, personal protector, he’s the quarterback of that unit. The man who identifies the number of potential rushers, communicates with the long snapper, gets the ball snapped, and has to be on-point to handle all rushes and blitzes, just like the center of an offensive line, punt rush teams throw at you. It’s no different than defenses who mug the A gaps and blitz and stunt and twist. Their goals are the same. Create confusion, make someone wrong, and get someone unblocked.

Taking over for Jordan Dangerfield, Allen’s served in the PP role since 2021 and has done a fine job. No major mistakes, no blocked punts. Now, the Steelers must find his replacement.

Like any proactive team, Pittsburgh works a backup upback. Throughout training camp, and I presume throughout the regular season, that man’s been Tre Norwood. So when Allen went down, Norwood could swap in and the unit hopefully wouldn’t miss much of a beat. Except Norwood also got hurt in the Raiders’ game, suffering a first-half hamstring injury that caused him to miss the rest of the game. He’s yet to practice all week and looks pretty unlikely to play against the Ravens meaning the team will have to move to their third-string option, who probably has been getting very few – if any – reps during the year. Though Allen was hurt in-game, the injury occurred on the kickoff following George Pickens’ game-winning touchdown and the Steelers never punted after that. So no one else took the field.

Based on our training camp notes, the next man up is most likely RB Jaylen Warren. He did log snaps there during training camp when Allen missed time and has the squatty, bulky frame to be someone capable of playing on that unit. Warren’s done well as a blocker in pass protection and that probably helps him digest doing something like being the upback but it’s still a new role with its own nuances. And Warren’s first game doing it, or whoever the team puts back there, will be on the road, in primetime, in a game the Steelers must win to keep playoff hopes alive (if they aren’t already eliminated by kickoff).

Don’t overlook the adjustment a new upback has to make. In the summer, Norwood saw plenty of work while Allen was shelved with his own hamstring injury. And in the first preseason game, there was an error between Norwood and long snapper Christian Kuntz, leaving a free rusher up the A gap, the last place you want a defender to run. Had it not been for Jordan Berry’s punt being angled left, this one almost certainly would’ve been blocked.

Want to know why the upback matters? Marcus Allen hurt most of the preseason. Tre Norwood replaces this summer. First snap of Seattle game. Norwood/Kuntz not on same page. Free rusher. Should've been blocked. Blocks most often happen with upman/LS miscommunication. #Steelers pic.twitter.com/7jUY4ibYr2

To be fair, that was back in August in the first live game of the season. There are more reps, more time later in the year and to a degree, that helps. But whenever you’re on your third-string anything, it’s worrying.

One last factor to consider. The Ravens aren’t dummies. They’re aware of what Pittsburgh lost. Maybe they don’t realize the backup is out but they know Allen is gone and the Steelers have a new man out there. John Harbaugh was literally a special teams coordinator before being hired by Baltimore and if anyone is going to test the Steelers’ protection, it’s going to be those guys. In a rivalry that’s always tight, I’d expect the Ravens to dial up aggressive punt rushes to see how the Steelers handle it. A blocked punt would completely change the tone of the game.

Hopefully everything is quiet on the Steelers’ front. Best-case, Pittsburgh’s offense moves the ball well, puts points on the board, and only trot Pressley Harvin III out two or three times. Statistically, the odds of a blocked punt are low. But it’ll be on my mind each time the Steelers walk out to punt. And there will be a knot in my stomach until the ball is booted away.