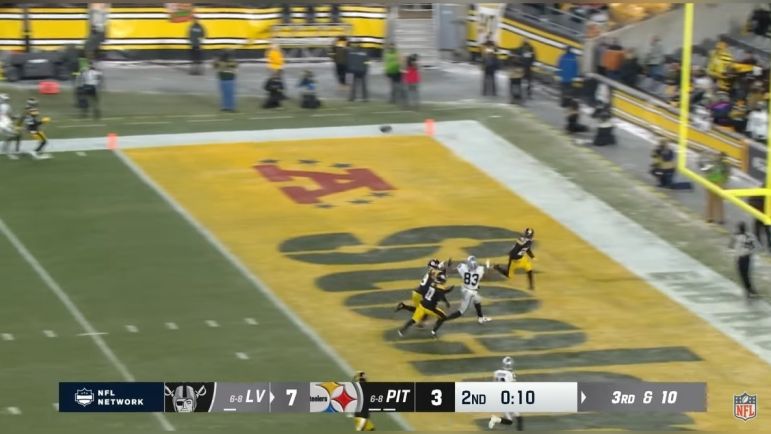 Minkah Fitzpatrick is the tight end eraser. One thing the Pittsburgh Steelers’ defense has always seemed to do well is force offense’s to play left-handed. To make them win through their Plan B, not their best players. Make the other guys, the non-stars and household names, step up. That was the plan Pittsburgh executed to beat the Las Vegas Raiders on Christmas Eve with quiet performances by WR Davante Adams, RB Josh Jacobs, and TE Darren Waller.

Waller’s non-descript outing can be credited to Fitzpatrick, who spoke to reporters after the game about the matchup and the pride he takes for winning the battle and the war.

“I love [the challenge],” Fitzpatrick told reporters via the team website. “That’s what I play the game for. You know what I’m saying? I can’t consider myself one of the best if I’m not going up against one of the best.”

Fitzpatrick bested Waller and the Raiders’ pass game. Waller finished the loss with four receptions for 58 yards. To his credit, he led the team in receiving yards and had a strong 34-yard grab but beyond that one play, he was quiet throughout the entire game. Waller returned to the Raiders’ offense in Week 15 after missing the middle half of the season with an injury. He caught a touchdown against the Patriots a week ago down the seam but when Derek Carr tried to look his way on the same concept this time around, the Steelers defended it well.

That one came at a price for Fitzpatrick who took a nasty fall on the ice out of the end zone. But he didn’t miss a snap and played a strong game. He finished the game with an interception, his fifth of the season, and a pass deflection.

Though Waller’s box score looks light, Fitzpatrick’s humble enough to know how tough a fight it was.

“Waller, he’s a great tight end. He’s athletic, he has great hands, great speed. He’s a big body so it’s tough. It’s tough to cover. That was my match up for the game. I did a pretty good job besides him the deep ball that they got to him. He gets paid too.”

But beyond that deep ball reception that only resulted in a Raiders’ field goal, not a touchdown, Waller has quiet. So was Adams. So was Jacobs. And by proxy, so was the Raiders’ offense. Completely shut out in the second half. Erased, you could say. Just like their playoff hopes.