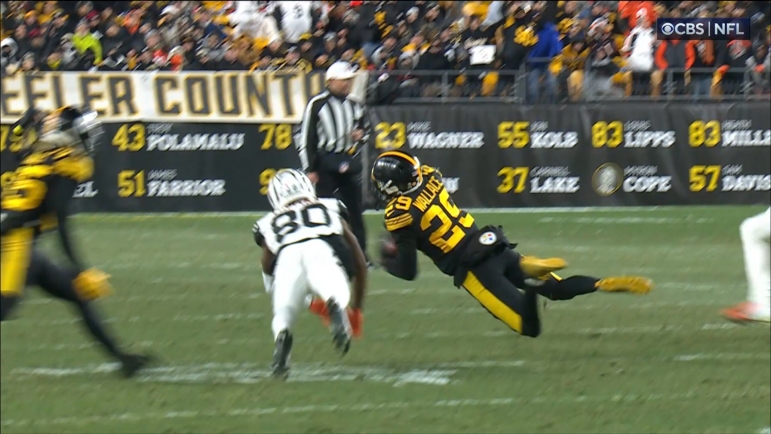 The Pittsburgh Steelers have spent the past half-decade as one of the top playmaking defenses in the league, leading the NFL in sacks every year in that span an frequently placing high in the takeaway department. Outside of the season opener, they haven’t necessarily excelled in either area this season, though the turnovers have started coming more, seven since the bye.

They now have 17 takeaways on the season, which as them back into the top 10 in the league after only registering five takeaways in the seven games leading into the bye. Cornerback Levi Wallace has played a role in that, nabbing two of his three interceptions on the season in the first two weeks after the break. But he’s getting lonely again.

“I was talking to my girlfriend, ‘Wilson’. I miss her”, he told reporters earlier today, via the team’s YouTube channel. Wilson is the football, for those who are confused. “I haven’t touched her in a couple weeks, so I need another interception soon”.

Truth be told, three interceptions is already a new career high for Wallace, who recorded two interceptions in each of his previous three years as a member of the Buffalo Bills. Starting six games out of 10 played this year, he has been one of the Steelers’ biggest playmakers on defense, also having 11 passes defends, one more than Cameron Sutton.

In fact, he only just lost a share of the team lead in interceptions on their last defensive snap when former Alabama teammate Minkah Fitzpatrick shut the door on the Atlanta Falcons with a game-sealing pick, his fourth of the year.

The Steelers do have 14 interceptions now (Sutton and T.J. Watt with two, and James Pierre, Ahkello Witherspoon, and Damontae Kazee all with one), which ranks second in the NFL, only one because the cross-state Philadelphia Eagles.

They trail in fumble recoveries, however, with just three, out of seven fumbles forced. Alex Highsmith leads the NFL with four forced fumbles, yet they’ve only recovered three, including one that they didn’t force when Colts running back Jonathan Taylor botched a handoff the Monday before last.

The turnover differential has been critical to the Steelers’ turnaround. They’ve taken the ball away seven times in the past four weeks, as mentioned, but perhaps even more important is the fact that they haven’t given it away a single time, likely tied for the longest stretch without a turnover in franchise history.

They’ve got five more games to add to their tally. Might as well make it a competition, right? Who gets the girl? She might not be the prettiest thing, but everybody wants her.