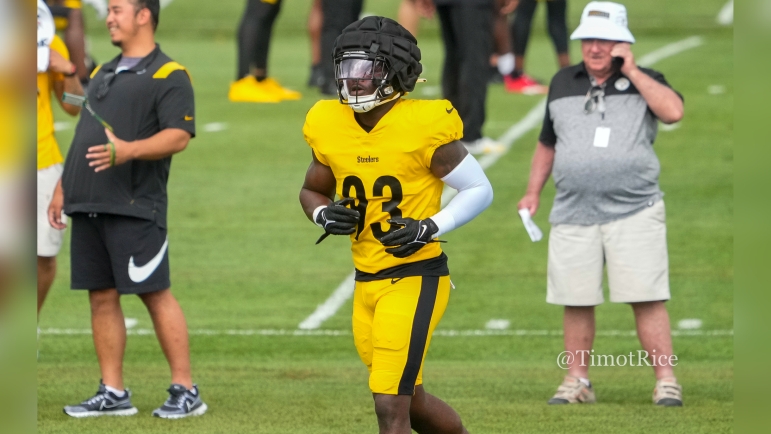 If there’s a young guy Steelers’ fans are itching to see before the season ends, it’s rookie linebacker Mark Robinson. Inactive for all but two games this season and yet to log a single defensive snap, Robinson has effectively redshirted his freshman season. Speaking with reporters Friday, Mike Tomlin was asked if Robinson could be an option over the team’s final month of action.

“He’s always ready and always working,” Tomlin said via Steelers.com. “He’s been one of those guys that’s been a healthy inactive. Oftentimes, young guys fall in that category but not due to a lack of work or continually preparing themselves. We’ll see how we divide the labor up.”

The labor was been divided against Robinson for nearly the entire season and he’s spent most weeks in street clothes instead of a uniform. The only two exceptions have been Week 6 against Tampa Bay, a game in which the Steelers were so beat up every healthy player on the 53 dressed, and Week 12 against the Indianapolis Colts due to Robert Spillane being injured. Robinson logged five special teams snaps against the Bucs and zero against the Colts, suggesting he still has a ways to go to gain Danny Smith’s trust on the teams units.

A 7th round pick out of Ole Miss who played RB until 2021, Robinson flashed in training camp. A physical player with a downhill demeanor, Robinson drew positive reviews from us this summer. In our camp recap, we wrote:

“His quick see-to-do, his downhill nature, and his physicality – oh boy does he love to hit. He also displayed short-area quickness and change of direction ability in camp to make plays in 1v1 drills. What’s most impressive is he plays under control. He’s not out of his gap or running around without a plan. That controlled aggression for how young he is is unique. In coverage, Robinson is competitive at the catch point and knows how to finish, though his success inside stadiums were a different story.”

And earned an “A-” grade for the summer. Still, Robinson had his struggles and his athletic limitations were shown in coverage.

But him being inactive for most of the season was predictable. Buried on the depth chart, he’s been stuck behind Devin Bush, Myles Jack, Robert Spillane, and core special teamer Marcus Allen. The group has largely stayed healthy this year making Robinson a weekly inactive.

While some would like to see him play down the stretch to get tape on him heading into 2023, DC Teryl Austin dismissed the idea of playing young guys “just to see” in speaking to reporters yesterday, saying those opportunities are merit-based.

“I’m not in the business of trying to see who’s up for next year’s varsity squad. I want guys right now that can help us win a game, because our job is to win games now.”

Perhaps Robinson can have a role in the season finale assuming the Steelers’ season is over. And maybe there will be injuries along the way that open the door. Myles Jack has been literally limping to the finish line and has dealt with knee and groin injuries since the bye. But even if he doesn’t play, Robinson will have more time at his ILB position and should be a name to watch in 2023. A bigger role could be in his future especially with Devin Bush slated to hit free agency.