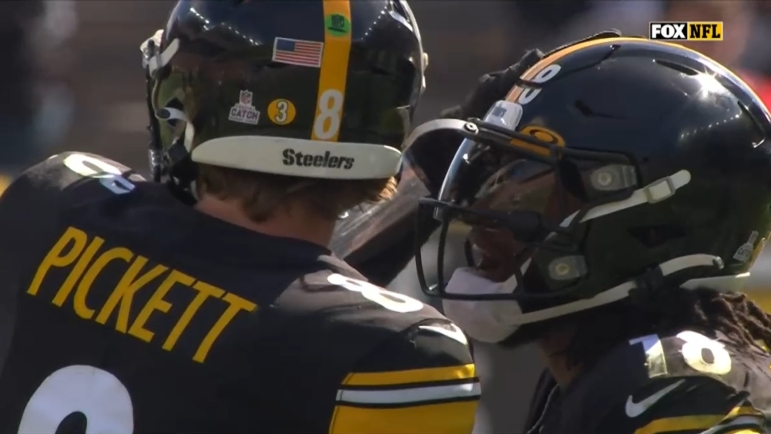 The Pittsburgh Steelers bet their future on quarterback Kenny Pickett when they used their first-round pick to draft him in the first round this year. Most of the way through his rookie season, how is that working out? Well, he’s 5-4 in games in which he started and played most of the way, including three wins in a row (not including the last Baltimore Ravens game), so there is that.

Outside of the turnovers, his numbers are not drastically different from earlier on in the season, truth be told. His yards per attempt have improved somewhat since the bye week, but it’s not a night-and-day difference. There is still much work to be done. But the progress is noticeable over time. Just ask his receivers, like Diontae Johnson.

“Kenny’s playing way better [than] when he first came in,” he told reporters yesterday, via the team’s website. “He’s starting to see it different. You can just see he’s playing more comfortable, getting the ball down the field, spreading it around, getting it to his guys down the field, and we’re making plays for him.”

Pickett completed 26 of 39 passes in his last outing, his first game back after missing most of the past two weeks due to a concussion. He threw for 244 yards, much of it in the second half—indeed, in the fourth quarter—with a touchdown and his first interception since before the bye. They only scored 13 points (with some missed field goals) but got the game-winning score in the closing minute.

In the five complete games he’s played since the bye week, he is 105-for-167 (62.9%) for 1,079 yards with a 6.4 yards-per-attempt average, throwing three touchdowns to one interception. He’s also rushed for 136 yards on 28 attempts with an additional touchdown.

As always, however, the tape reveals more than the numbers, and we saw some of Pickett’s best football on Saturday thus far. In fact, outlets like Pro Football Focus have him rated rather favorably in the second half of the season. He is their third-highest-graded quarterback since Week 12 among qualifying quarterbacks behind only Joe Burrow and Trevor Lawrence.

The Steelers still have some hopes for a playoff spot this year, slim as they may be, but the overwhelming consensus is that the real import of the remaining two games of the regular season is the study of how Pickett continues to progress. Because it’s not about making the playoffs just one year, even if that is the perennial goal. It’s about building a sustainably successful team, and that starts with having a playoff-caliber quarterback. He’s shown signs, but the jury remains out, and unsurprisingly so.