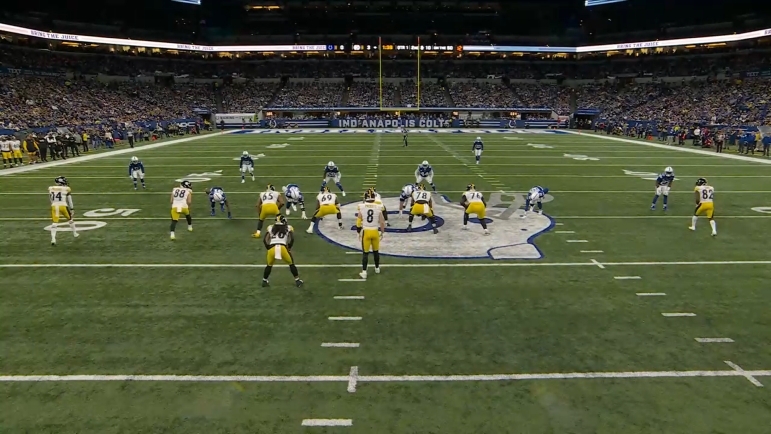 Of the 29 rushing attempts out of the backfield that the Pittsburgh Steelers ran on Monday night against the Indianapolis Colts, only 10 came from either of their top two running backs. Starter Najee Harris had to bail by halftime after suffering an oblique injury, while Jaylen Warren was inactive because of an injury of his own.

And thus the rest of the work was left to the other running backs on the roster—and the practice squad—to shoulder the load. But thanks to the fact that he was running second and third team throughout the offseason, rookie quarterback Kenny Pickett already had a familiarity with his backs for the game, Benny Snell Jr. and Anthony McFarland Jr.

“That was huge, all the reps I got with those guys in training camp,” he told reporters yesterday via the team’s website. “When those guys were back in the backfield with me, I was really comfortable, because I had so many reps in camp and spring and the preseason games with those guys. I’m ultra-confident in those guys. They know what to do and they go out there and do their thing. They’re special. I think we have a really good room.”

As you might recall, the Steelers pushed forward into 2022 with veteran Mitch Trubisky in the starting lineup under center, whom they signed as a free agent after Ben Roethlisberger retired. He only took first-team reps throughout the offseason process, leaving a sparse few for Mason Rudolph, let alone the rookie.

So that meant working instead with the second or third team personnel. That excluded starting running back Najee Harris, though he missed most of training camp anyway, but featured a heavy dose of the likes of Snell and McFarland.

Of course just because he got more reps with some players doesn’t mean they’re going to get more snaps now. He also played a lot with Connor Heyward and Miles Boykin, but playing them a lot is not what is in the best interests of the offense just because they had that offseason familiarity running plays with Pickett.

Throughout the season, though, the rookie quarterback has mentioned sneaking in reps with the first-team players whenever they could, whether it was between drills in practice or even just catching balls on the sideline during games.

He mentioned in this interview that he has felt like he has been “playing catchup” working with Harris, though that should be no surprise anyway due to the time that he missed because of his foot injury. It’s not clear if Harris will be out there for him next week, but he’ll be comfortable with whoever is.