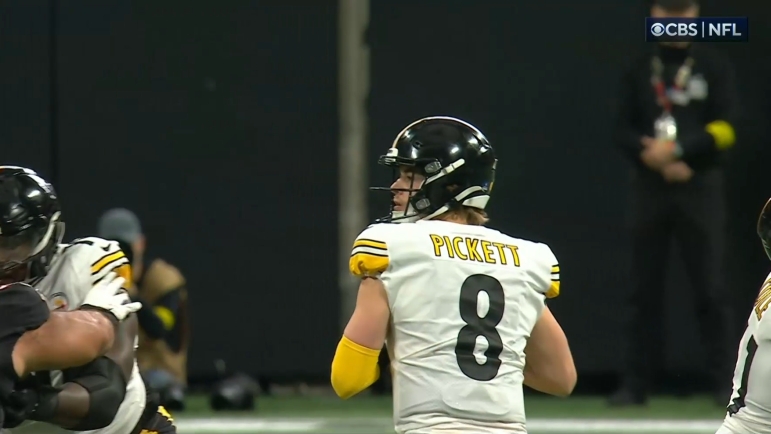 If it feels like it’s been awhile since Kenny Pickett last threw an interception, you’d be right. He’s now up to 128 pass attempts without a pick, his last one coming coming before the bye in Week 8 against the Philadelphia Eagles.

Not only is that a pretty number, it’s also a record. According to Elias Sports, it’s the most pass attempts by a Steelers’ rookie without a pick in team history.

“It’s being smart. making sure I put our team in position to win,” he said as shared by the team’s YouTube channel. “Sometimes I’ve thrown it away or tuck it and run…I feel like I’ve done a lot better job of that the last couple of weeks. And it’s something that I think is a recipe for success for us moving forward.”

While Pickett’s eight interceptions on the season may look discouraging on the surface, they’re numbers that lack important context. The nature of the pick is important whether you’re talking about his first career pass attempt, a jump ball Chase Claypool lost out on or a Hail Mary or another instance against Miami where Claypool got tangled up with a DB, leading to an easy takeaway by the defense.

That’s not to say Pickett’s made mistakes. He certainly has and he had a pair of backbreakers to stop rally attempts in that Dolphins’ loss. But he’s cut down on them and in fact, eliminated interceptions since the bye week. His last INT came on his final pass of the Philadelphia Eagles’ loss in Week 8. Since then, it’s been a clean sheet.

The fact the Steelers are now playing competitive games and winning them is helping. Instead of being blown out by the likes of Buffalo or Philadelphia, Pittsburgh is playing ahead. Over Pickett’s first three games in which he started and finished, he averaged 52 dropbacks per game. Since the bye, that number is closer to 40. A figure that still seems high but Pittsburgh’s also possessed the ball much more than they had, including in today’s game out-snapping the Falcons 65-53.

It’s no coincidence the Steelers are 5-1 in games in which they don’t turn the ball over compared to 0-6 when they do. Ball security will be paramount if Pittsburgh wants to turn their first winning streak into three in a row when they face AFC North foe the Baltimore Ravens for the first time this season next weekend. Pickett will be required to make plays but more importantly, he’ll be required to keep the ball in the Steelers’ hands.