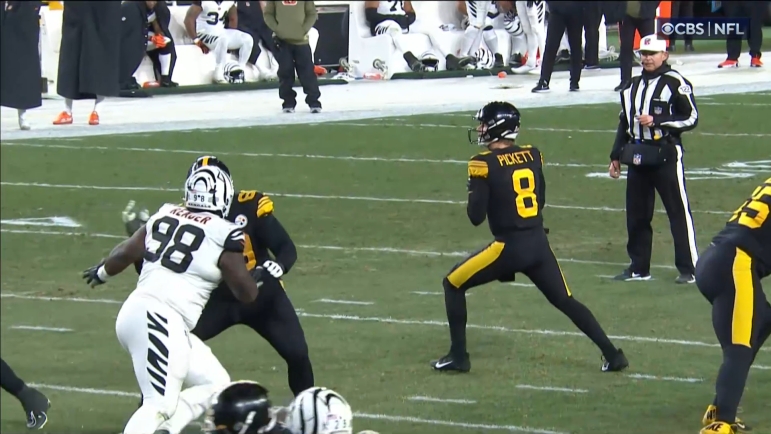 These games are not easy, especially for rookie quarterbacks. In the Mike Tomlin and John Harbaugh era, rookie quarterbacks are 0-4 in these matchups. Former Ravens quarterback Joe Flacco owns three of those losses and Devlin “Duck” Hodges owns the lone loss on the Steelers side.

One of the reasons for this is how good each side’s defenses are and how each team likes to bring the pressure. The Ravens have blitzed often this season, blitzing on 22% of their snaps which is 18th most in the NFL according to Sports Information Solutions.

When speaking to the media today, in a video posted to twitter by Chris Adamski, Pickett discussed the Ravens’ tendency to blitz and the need to be able to counter it.

Kenny Pickett on dealing with the Ravens propensity to blitz pic.twitter.com/Rr6O55UGgW

“They do a lot of really good things with their blitz package” Pickett said. “It’s pretty diverse, they have a lot of different looks, so we got to be diligent in our preparations and have some good answers for Sunday.”

The good news for the Steelers and Pickett is that Pickett is excellent against the blitz. According to PFF, Pickett’s best stats have come when he is blitzed, posting three touchdowns, zero interceptions with a 72.1% completion percentage. His numbers rank sixth best in the league against the blitz which includes a 106.3 QB rating. Pickett also throws the ball deeper when blitzed, averaging 7.1 yards per attempt. In comparison, when he is not blitzed his yards per attempt drops to 5.8. PFF has him down for two big time throws when blitzed, showing he is more than capable of making big throws when surrounded by pass rushers.

I doubt the Ravens will adjust their scheme much, as that just is not what happens in Ravens vs Steelers matchups, and that could lead to some big plays for the Steelers offense. In the Week Eleven matchup against the Cincinnati Bengals, the Bengals tried blitzing Pickett early and often in the first half and Pickett picked them apart. It was once they shifted to sitting back in the second half did they start to stop the Steelers offense.

Given the likelihood of the Ravens coming out like the Bengals and blitzing, it will be critical for Pittsburgh to take advantage of this and score touchdowns. With Lamar Jackson likely missing the game, this game most likely won’t be a shootout, but the Steelers still need their offense scoring.

Pickett has a chance to be the first rookie quarterback in the Mike Tomlin and John Harbaugh era to win in this rivalry matchup. Can he do it? We will find out Sunday afternoon, but if the Ravens come out and blitz often, I like his chances.